— Cloak and Dagger, The
The Bristol Drag Collective Present After Dark - A selection of some of Bristol's finest up-and-coming bands with drag disco from Remi Melee
time:20:30
price: Tickets Below

The Bristol Drag Collective are proud to present After Dark - a Pride gig and club night with performances from headliners Beefywink supported by Try Me, Fräulein, and t l k. No night is complete without a drag disco DJ'd by the insanely talented Remi Melee. This event is the perfect way to round off Pride 2021!

Beefywink's sound embodies the discordance in today’s culture and retells it through infectious, pumping punk anthems.​Renowned for their erratic stagecraft, the 'wink have acted as an ideal support for bands such as Nova Twins, The Jacques and Sœur. Shaped by the multitude of genres found throughout Bristol’s music scene, their songs have an ever changing range of influences with one commonality: energy.
https://www.facebook.com/beefywink

Bristol-based duo Try Me are a disco-punk act that have exploded onto the Bristol scene. Formed of free-spirits Hector Boogieman and Bendy Wendy, the pair combine their mischievous energies to create 90s inspired beats. Their ability to harness the fantastic in the everyday have seen their fanbase dramatically increase, with their latest release Heavy Lunch amassing over 300,000 views on TikTok alone.
https://www.facebook.com/trymewav

Fräulein are Joni Samuels (vocals, guitar) and Karsten van der Tol (drums). The now London-based duo formed in Bristol in 2018, through a shared love of alternative music and cornershop whiskey. They have spent the subsequent years garnering a reputation as a ferocious live act; performing everywhere from their native West country to some of London’s most iconic modern venues (The Windmill, Old Blue Last).
https://www.facebook.com/heyfraulein

t l k is a Bristol-based producer, vocalist and collaborator. Her sound nests in the ‘melantronic’ subgenre, shaped by Bristol’s improvisation scene and manifested in her introverted moments.
https://www.facebook.com/tlkvox

Remi Melee is one of the most creative and versatile performers on the UK Drag scene. As a proud member of the LGBTQA+ community, Remy loves DJing at queer events and in drag. Having cut her teeth on rock and metal, Remy also plays a range of genres from 90s pop to R’n’B to House to Funk.
https://www.facebook.com/RemyMelee/ 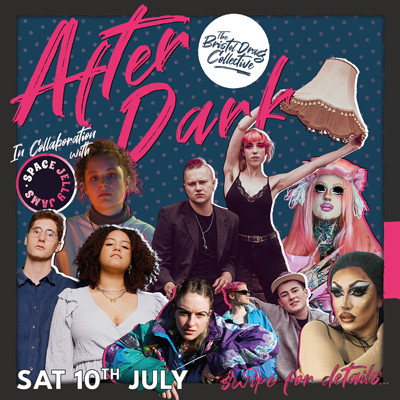