'Imelda May apologises for the rescheduling and any inconvenience it will cause. This is due to the release of the new album 'Mayhem ' being delayed and the consequential scheduling changes. Look forward to seeing you all in February! '

Dublin-born Imelda May is a female vocalist. Specializing in rockabilly with a look to match, she has an extensive repertoire of cool covers and self-penned songs.

Jools Holland is excitable by nature, but when he spots a new artist who has what he considers 'it, ' his enthusiasm goes off the scale. To go by his reaction to Imelda May, she has 'it ' in spades. 'I 've got to have you on the show, ' he told her after seeing her play live and so, a couple of months ago, she duly found herself on 'Later With Jools Holland, ' wowing an audience who included Jeff Beck, Elbow and Roots Manuva. Beck, in fact, made a point of telling Holland that he was only there to see Imelda.

National TV exposure, a clutch of musician fans not bad for an Irish newbie. But with respect to Jools and crew, it works both ways: Imelda got that 'Later ' boost, but 'Later ' can claim the kudos of discovering a talent who doesn 't sound like anyone else.

Having fallen in love with rockabilly and the blues as a nine-year-old in Dublin the only kid in her class who wasn 't into a-Ha and Wet Wet Wet she 's turned them into a cool, swinging fusion that 's both classic and oddly modern. That 's not just PR fluff: though her musical heart lies in early rock 'n 'roll (she 's partial to the clothes, too - her wardrobe is stuffed with leopard-print cardigans and tight bad-girl jeans), she puts a 21st century spin on things. 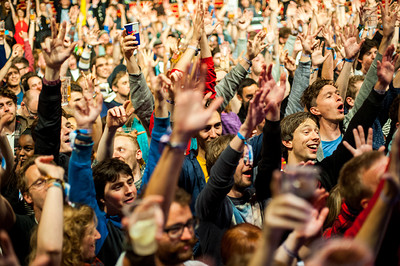