CONCRETE JUNGYALS BACK IN THE RAVE

Guess who's back? Back again? CJ's back. Tell a friend!

We're back babyy and we're badder than ever! Bringing you fire events showcasing an array of diverse and eclectic talent every third Wednesday of the month at The Crofters Right's, Stokes Croft.

If you're new here, we're Concrete Jungyals, a Bristol-based, female-led, genre-fluid music and creative arts collective, empowering and celebrating female-identifying, non-binary, people of colour and LGBTQ+ people in the Music and Creative industries.

No matter who you identify as, we invite you all to join us this Wednesday 19th January for an evening of Jungle, Breaks, Footwork, Hardcore and more, with top-shelf selections from:

Known for her curatorial alchemy, ALYA L's selections move seamlessly across genres and sensibilities; from fresh avant club finds to hardcore and other miscellaneous gems. Her impish mixing style has led to a core residency spot for Psychotherapy Sessions, a Bristol clubnight championing outsider electronics.

London-based Jamiu has been releasing varying styles of music on Unchained Recordings, Sicaria Sound's Cutcrxss Recordings & Jungle Invaders since putting out his debut, self-released EP 'Don't Miss' at the end of 2020. His DJ sets are as eclectic as his releases so expect skippy West African energy in the faster realms of electronica.

Sisu crew creative lead and Balamii resident mixtress is a hardcore and jungle afficionado in her own right but her sound isn’t solely defined by this-- sparked by a hypothetical and humble discussion six years ago, her every-genre-under-the-sun selections have caught the attention of Lobster Theremin and Late Night Shopper, with sets at most radio stations in London. When she’s not blasting hardcore, her Netil residency sees her more ambient and downtempo listening roster. As an advocate for fighting the imbalance of gender inequality within music, her work at Sisu and prior to that running women-only DJ workshops have formed her passion for moral and equitable change in music. She’s an avid whosampled contributor, jazz record collector and will bang out a set anytime and anywhere in any genre.

Extreme euphoria, rapid breaks and subsonic rumbles are sure to get ya moving n grooving. Samurai Breaks has had a wild 2021 releasing with Hoover Sound, selling out shows up n down the country and winning DJ MAG's 'Best Breakthrough Producer'.

*DISCLAIMER*
Please be aware that this event is an inclusive and harassment-free event. It is crucial that all participants remain respectful to all artists, promoters, staff and attendees throughout their time at the event. We define ‘respectful’ as not harassing or causing any unwanted attention to others, this may include (but not be limited to) any form of verbal or non-verbal abuse, inappropriate or non-consensual touching, inappropriate invasion of privacy and/or space or any other form of inappropriate behaviour that may cause discomfort, distress or harm to others. 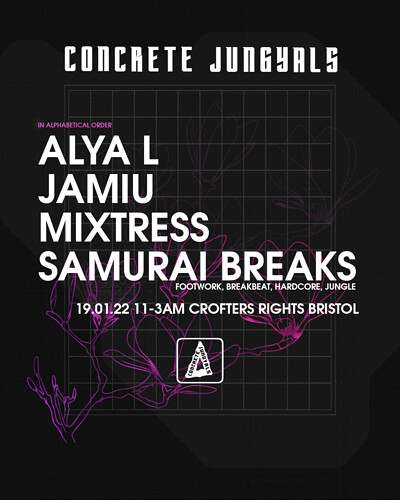