“Without surreal-hardcore anti-heroes Flipper, there’d be no Melvins, there’d be no Nirvana, there’d only be Fall Out Boy. Still on fire after 2019’s tour with Jesus Lizard’s David Yow on vox, catch their iconically frazzled sludge-punk while you can.”
Join the Headfirst mailinglist for recommendations.

is equally stoked and bummed to announce the first farewell european tours of San Francisco´s noise rock legends FLIPPER.
Yeah you got it right. After over 4 decades on the road, several line up changes and a consistent number of releases on different labels over the years,
Bay Area´s noise rock legends FLIPPER have decided to call it a day and celebrate the end of their career with 2 european tours,
one in august and one in november and bringing different opening acts each time.

Originally started by members of NO TREND & THE SLEEPERS in the spring of 1979 and with only 2 original members left today - Stephen De Pace (on drums) and Ted Falconi (on guitar) -
Bay Area´s "punk rock" legends FLIPPER need no introduction. Heavily influenced by The Birthday Party, The Velvet Underground, Chrome, PIL, Joy Division and The Stooges to name a few,
they have, throughtout their 40+ year spanning career, inspired a large number of bands with their unique slowed-down, bass-driven, heavily distorted and repetitive style of "punk".

Some of the bands that mention them as a major influence and have both covered their songs and collaborated on different projects,
are The Melvins, Terminal Cheesecake, REM, Mudhoney, Unsane, Jane´s Addiction, Unwound and last but not least Seattle´s Nirvana,
whose bass player Krist Novoselic played and toured with the band in the 2000s. In "GET IN THE VAN", his memoir of the early 1980s punk rock scene,
Henry Rollins from Black Flag/Rollins Band described the Flipper experience this way :
"They were just heavy. Heavier than you. Heavier than anything. When they played they were amazing!

In order to go out with a bang, they´ve recruited San Pedro´s rock legend and royalty MIKE WATT (Minutemen, Firehose, Iggy & The Stooges etc..) to pull double duty.
The man himself will - in fact - handle the low end and scream his lungs out. They will therefore perform as a 3 piece for the very first time!

On top of that, as the icing on the cake, San Diego´s underground veterans 16 (who recently put out their latest full length "Dream Squasher" on Relapse Records)
will be greasing up the stage with their abrasive mix of west coast sludge metal and claustrophobic southern swamp rock.

Are you ready? We definetely are! 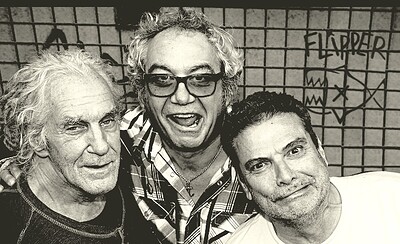