A trio of old friends and long-time musical collaborators, Marie Davidson, Pierre Guerineau and Asaël R. Robitaille share many things in common (with the former two also being married to one another, and writing & performing together as the group Essaie pas.) Each of them has made waves in electronic and experimental corners of the music industry; often working together, for labels like DFA, Cititrax, Holodeck, Orange Milk and Mind Records. But they’re also devotees of classic pop songwriting, and they created Marie Davidson & L'Œil Nu to celebrate and reimagine those shared musical touchstones.

If there’s a mood that encapsulates L'Œil Nu, it’s the one to be found at 3AM, after a long night of drinks, when it’s time to start putting on the classics. This, for Marie, Pierre and Asaël, means Fleetwood Mac, Rush or soundtracks from French cinema, and it was in one such moment that the germ of the idea for L'Œil Nu was planted. Later evolving and growing to encompass something bigger: to be a band, to write songs and to approach music from a pop perspective.

The three first met through legendary Montreal venue Le Brique over a decade ago, a now-defunct loft space and DIY venue that took on cult status in the city, hosting new wave, free jazz and everything in between. “It was a joyful mess,” says Guerineau. Robitaille lived there, and he and Guerineau were part of an ever-changing circle of makeshift bands. This is where in summer 2011 L'Œil Nu came to life, both fans of the golden age of French and Italian cinema soundtracks, they started composing, recording and mixing a track per night. Marie was also a regular visitor, and after meeting the other two, they soon became close. In between working the door at shows, they would share gear, experiment with music and pass different musical inspirations between themselves.

Since then, they’ve each followed their own trajectory while often still working together. Marie’s first release was in a duo, Les Momies De Palerme, on Montreal’s Constellations imprint (also home to Godspeed! You Black Emperor). Since then, she’s released a spate of solo releases, starting with 2015 debut album “Un Autre Voyage”, that nodded to Italo disco, proto-industrial and electro, followed by 2016’s dancefloor-oriented “Adieux Au Dancefloor”, and in 2018 her celebrated “Working Class Woman”, on Ninja Tune, a multifarious mix of club sounds combined with biting critiques of the dance music industry.

Pierre Guerineau is a French composer and producer living in Montreal. Besides two critically acclaimed albums on DFA Records as Essaie pas, his duo with Marie, he has co-produced her solo output, produced over thirty releases on labels such as NON Worldwide, PAN records and Cititrax/Minimal Wave, and collaborates regularly with artists Bernardino Femminielli, Jesse Osborne-Lanthier and Alex Zhang Hungtai. After navigating a wide range of rhythm-oriented music for the last half decade, he recently developed his voice as an independent film composer. His first solo album, under the moniker Feu St-Antoine, got released this summer on Éditions Appærent, a brand new label and publishing platform founded by Pierre, Jesse Osborne-Lanthier and Will Ballantyne.

Asaël Robitaille is a Montreal-based classically-trained composer, multi-instrumentalist/guitarist, electronic musician and producer whose work spans a multitude of styles and genres, on projects both locally and abroad. His instrumentation, arrangement and production work is featured on albums by artists such as Femminielli (MIND Records), Marie Davidson (Ninja Tune), Essaie Pas (DFA), Jerico, Feu St-Antoine, Elle Barbara (Tricatel), Jesse Osborne-Lanthier (raster-noton, Halcyon Veil, Haunter Records) and Ramzi (RVNG, Moodhut). Under the moniker Bataille Solaire, he has released genre-bending music on critically acclaimed label Orange Milk as well as MIND Records. Asaël is a mainstay of the Montreal contemporary music scene and has recently started curating a mega-band alongside label-mates and collaborators entitled “Orchestroll”. He has also toured extensively in both the Americas and Europe playing shows both as a solo artist and accompanying live performer.

The kickstart for Marie Davidson & L'Œil Nu came from Marie’s disenchantment with club culture. She wanted the camaraderie of making music with the people she knew best, and each of them were enticed by the idea of doing things in a different way. “We wanted to make songs,” Marie says, contrasting this with the approach that had guided their respective outputs in electronic music. Most of the album’s entries would start with an idea or melody that Marie had hummed into her phone, and from there, tracks would undergo a long process of evolution.

Those initial ideas were a jumping off point, from which songs would be expanded, re-imagined and extrapolated; each of them was shaped by different elements from the trio’s deep well of musical inspirations, from electro, to renaissance composition to jazz classics. Starting with an early demo of ‘Sentiment’ that Pierre and Marie played to Asaël, ideas and arrangements soon started blossoming between the three of them, and not long afterwards they sketched out ‘Back To Rock’, the moment where they felt they’d really got into their stride with the project. “This magic is the result of 3 friends enjoying each other’s company just as much as they’re enjoying the sounds coming out of the speakers of the studio,” says Marie.

Their first proper release as a group is the musical outpouring of years of friendship and shared musical interests, culminating in a forward-facing, innovative pop record which sees Marie’s dark humor and acerbic observations delivered in bold new ways. 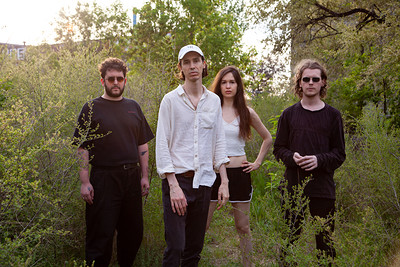