amendments; A Play on Words

— Alma Tavern and Theatre
The rising prevalence of political correctness needs to be addressed, and John Chesterton is just the man to do it!
time:20:00
price: £9 / £7 conc.

Middle-Weight Theatre Company return to The Alma Tavern and Theatre with an Edinburgh Fringe Festival preview: ‘amendments: A Play on Words’

John Chesterton works in a world where being politically correct is paramount. Fear of oppressing or injuring the feelings of an increasingly sensitive populus is widespread, and any language deemed inappropriate or discriminatory becomes strictly forbidden by the company heads. At an alarmingly swift pace, words vanish and phraseology begins to disappear from people's vocabulary, consigned unceremoniously to the companies 'no' list. And while all around him conform, John seems to be the only one asking: if this censoring continues, will he soon be inhabiting a world where there is nothing left to say?

Bad language may or may not be used throughout this production… 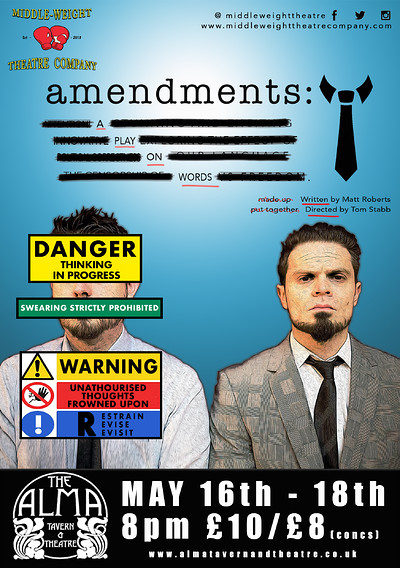