— Alma Tavern and Theatre
Sherlock Holmes has gone. and Watson is now alone. But London seethes with false reports and rumour. It is time to set the record straight.
time:20:00
price: £13.00

Watson is alone. His beloved wife Mary and the great Sherlock Holmes are both gone. But London seethes with false reports and rumour. It is time to set the record straight.

So Watson tells his tale... a tale of long buried secrets, betrayal and death. For there is a shadow in the gutters of London. A spider's web of poisonous intrigue lies across the city. Someone is playing a long game and Holmes and Watson face their greatest ever challenge. But as Watson unravels the story, is the game really over?

Based on the stories by Sir Arthur Conan Doyle, 'Watson' is written with Bert Coules (BBC's The Further Adventures of Sherlock Holmes; Cadfael; Rebus) and performed by Tim Marriott (The Brittas Empire; Allo, Allo).

'Watson' is inspired by two Sherlock Holmes adventures - The Sign of the Four and The Final Problem. 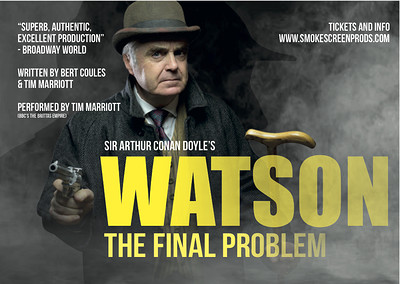