The Doomed Hysteria of an Unexamined Mind

— Alma Tavern and Theatre
Exploring the complex webbing of violence, that the victim becomes the culprit, that the pitied becomes the delinquent.
price: £10 / £7

Bent on the insufferable absence of people a quest ensues for the pursuit of madness: Clementine attempts to inject himself with lunacy so that rather than being so overwhelmingly alone he can converse with the voices in his head, which he is sure are there. He tries to achieve this through any means possible: religion, drugs, then the familiar mortal coil.

A piece which explores the complex webbing of violence, that the victim becomes the culprit, that the pitied becomes the delinquent. It explores the true uncertainty of the rational mind. And examines the eternal mortal antagonism: the doomed hysteria of being against the dark fortitude of escape.

WORMS are is Bristol University Collective specialising in writing original dark comedies. This is WORMS second production, after their sell out, 5* debut last season.

Praise for past productions

★★★★★ “It is raw. It is visceral. It is close to the bone most of the time, written with a razor-blade precision... This bold and brilliant production is without a doubt a precursor to the future productions of this fledgling theatre collective that seemed to have made their entrance felt.” - Epigram 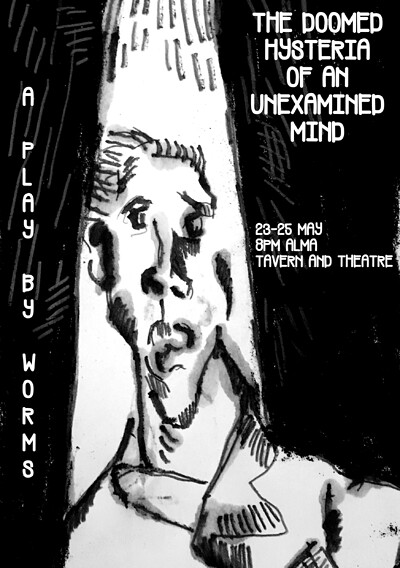