The Picture of Dorian Gray

Dorian Gray is a beautiful man. This, along with his callousness is what defines him.

When Basil Hallward paints his likeness, Dorian becomes infatuated with how he looks in all his youth and glory - so much so that he forges a sinister pact to retain his looks in exchange for his soul.

Set in the decadence and hedonism of Victorian London, The Picture of Dorian Gray, is a shrewd look into the fading morality of society, but perhaps is even more relevant in today's world than it was when initially penned by Oscar Wilde.

Join Schoolhouse Productions, the Alma's in-house company, for their fourth production, after their sell-out A Doll's House (March 2017) and Abigail's Party (Nov 2017, Jan 2018).

ABIGAIL'S PARTY
"Anna Friend’s gloriously intimate and flawlessly cast production... is one of the finest renderings of the play I have ever seen." - 5 STARS (Holly Georgeson - The Flaneur)

A DOLL'S HOUSE
"A powerful and thought- provoking piece of theatre which is bold, entertaining and thoroughly lives up to the high expectations I have of this young company" - 5 STARS (Sarah-Jane Howard - 365 Bristol)
Oscar Wilde
"It’s worth the ticket for that final scene, alone. The rest … is bonus." - 4 STARS (Arthur Duncan - RemoteGoat) 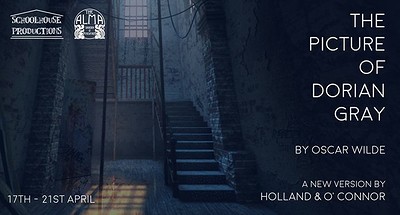