Get ready for a night of pure, undiluted Rock’n’Roll at the Anson Rooms (University of Bristol). We have lined up two of Britain’s greatest retro Rock’n’Roll acts + The Tone Stars for support! Both of the nights headliners, Si Cranstoun & His Band and Rebel Dean & the Star Cats, are infamous for delivering retro infused, but modern Rock’n’Roll that drags audiences out on the dance floor. For any fan of Rockabilly and old-school Rock 'n' Roll, this is a night you can’t miss!

Bristol’s own Dj Rock Ape, will make sure the party keeps rolling between the acts. — So you’ll never have to slow down once the momentum is going!

Si Cranstoun & His Band
The Express baptised Si Cranstoun “The King of Vintage” for his unashamedly retro sound. While Mr. Cranstoun definitely deserves that title, his music is as much living in the present moment as anything on the radio. With one foot solidly planted in musical influences from the 40s, 50s and 60s, the King of Vintage is blazing into the 21st century with exceptional songwriting, powerful vocal performances and a masterful control of multiple instruments. With all tunes being original and written by Mr. vintage himself, Cranstoun masters his material with a rare intimacy. It is literally impossible to stand still when the band takes the stage, their retro sound will shake your feet, and blow your worries out of the stratosphere. With all-out old-school compositions, injected with a dose of high-octane energy, Si Cranstoun and his band is the perfect example of what Rock’n’Roll is supposed to sound like in the now!

REBEL DEAN and THE STAR CATS
According to Rockabilly legend, Darrel Higham; “Rebel Dean is probably the most successful male Rock’n’Roll artist in Britain today.” — That’s not a small compliment coming from a guitarist who have played with Shakin’ Stevens, Jeff Beck and Eddie Cochran! Rebel Dean didn’t take any short cuts to his success. Since he was 18, he has been touring and recording as a professional musician, entertainer, singer, songwriter, and even actor. He has literally played live for over a million people worldwide throughout his career, and you feel that experience in the way Rebel controls the audience. Whether he is doing Film or TV appearances or rocking the stage live in concert, Rebel Dean, knows how to deliver a world class show, that extends way beyond the edge of the stage. Together with his band, the Star Cats, he delivers a sound that is unmistakably Rock’n’Roll, pulling inspiration from the 50s up until today. If you need any kind of foretaste of Rebel Dean’s original material, have a listen to his latest album on Foot Tapping Records; Rock N Roll Gypsy, but of course the real magic occurs during their high powered live show! 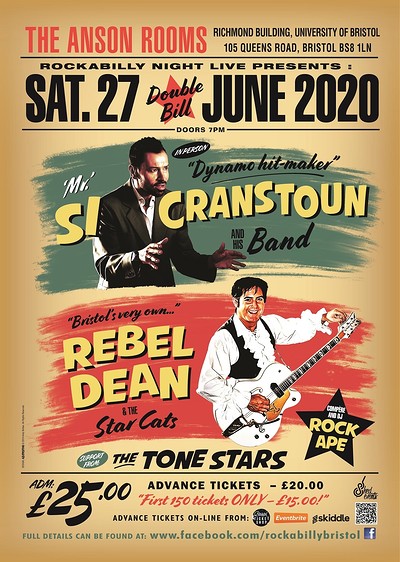