Based on the novel “Dubrovsky” by Alexander Pushkin the great silent-era sex symbol Rudolph Valentino departs from his onscreen persona of a Latin lover and delivers one of the most nuanced and powerful performances of his career.

In this epic romance set in 18th-century Russia, directed by Clarence Brown (The Last of the Mohicans, Flesh and the Devil, Anna Karenina) Valentino stars as Vladimir Dubrovsky; a lieutenant in the Imperial Guard who becomes a fugitive after he rejects the amorous attentions of the Czarina Catherine II (Louise Dresser).

Returning to the land of his father, Dubrovsky becomes a masked defender of justice known as ‘The Black Eagle’, and swears vengeance upon a nobleman (James A. Marcus) who has been victimizing the poor and weak. A character which was inspired by Douglas Fairbanks’ The Mark of Zorro (1920).

Live piano accompaniment by John Sweeney with restoration by Lobster Films, Paris. With thanks to Film Hub South West. 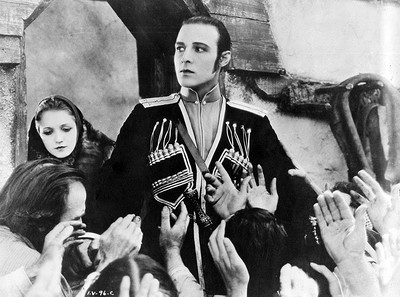