Set in the Jewish ghetto of medieval Prague, the film opens with the Jewish community being threatened with removal from the city. Responding to this crisis, Rabbi Loew, the head of the city's Jewish community, begins to construct a monstrous figure out of clay - the mythical golem of the title. Calling upon ancient, mystical powers, the Rabbi brings this creature to life, hoping to protect his people.

With its foreshadowing of the Jewish persecution that was to come in Europe, DER GOLEM is a powerful and poignant piece of film-making - capped by inventive special effects, and exhilarating lighting and cinematography from the film's photographer Karl Freund. Wegener himself stars as the titular creature, and he cuts an imposing and impressive figure in his tactile, clay like costume and make-up - an extraordinary bit of physical special effects.

Supervised by the Friedrich-Wilhelm-Murnau-Stiftung and Cinematek, DER GOLEM has been restored in 4K by L'Immagine Ritrovata, Bologna from the film's original negative that was thought to have been lost. 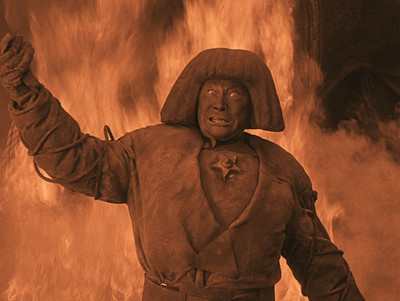