After the huge success of his first swashbuckling adventure (1920’s The Mark of Zorro), Douglas Fairbanks took his next project even further with a bigger budget and an even bigger sets in the shape of an adaptation of Alexandra Dumas’ masterpiece The Three Musketeers.

In no other role is Douglas Fairbank’s boyish vigour as irresistibly engaging than as D’Artagnan in Fred Niblo’s The Three Musketeers (1921). “When Alexandra Dumas sat down at his desk,” wrote LIFE magazine critic Robert E. Sherwood, “he doubtless had but one object in view; to provide a suitable story for Douglas Fairbanks to act in the movies”.

D’Artagnan is a naïve and ambitious farm boy who yearns to join the Musketeers, the elite regiment of guards under King Louis XIII (Adolphe Menjou). After his arrival in Pairs, he meets three members of the regiment, Athos (Leon Barry), Porthos (George Siegmann) and Aramis (Eugene Pallette) and joins their struggle to defend Queen Anne (Mary MacLaren) against the devious Cardinal Richelieu.

But this screening isn’t just about Fairbanks. The event will also give us a chance to celebrate one of Bristol’s very own Hollywood film stars, Nigel De Brulier (born in Frenchay in 1877) who plays the infamous Cardinal and would continue to have a very successful film career until his death in 1948.

In line with Government rules around Covid, face coverings will be required to be worn. 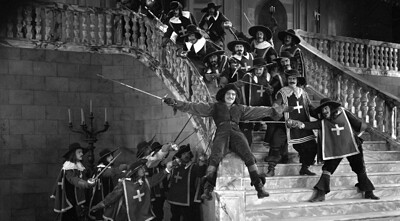