“Courageous documentary portrait of Western colonial atrocities in Niger and beyond. African Apocalypse sees poet Femi Nylander trace the facts behind the deranged, bloody rampage of a French military captain - the supposed historical basis for Conrad’s Heart of Darkness.”
Join the Headfirst mailinglist for recommendations.

‘A people’s history of colonialism in the form of an epic journey.’

The UK Premiere of the Hausa Dub (with English subtitles).

Armed with a copy of Joseph Conrad’s controversial classic Heart of Darkness (1899), Nylander goes in search of the legacy of colonial horror in West Africa and unearths its shocking reality. ‘African Apocalypse’ follows the trail of a 19th century French colonial military commander who burned his way across the continent. Tens of thousands were massacred in the name of imperial domination. With communities devastated by a century-old atrocity now speaking out for the first time, Nylander begins to question his own sense of responsibility. 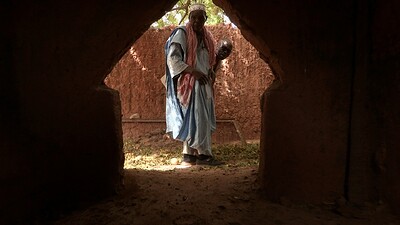