Raise the Bar are teaming up with the UK's leading spoken word record label Nymphs & Thugs for our November show.

LIVEwire's national tour comes to Bristol featuring none other than Salena Godden , Jess Green and Kevin P. Gilday. Plus floor spots from some of the best local talent, and hosted by RTB's Saili Katebe and N&T's Matt Abbott.

An evening of electric spoken word poetry, presented by the UK's leading spoken word record label, Nymphs & Thugs, in partnership with Raise The Bar. These 'LIVEwire' regional shows see some of the most exciting poets in the country sharing a stage to bring you rebellious, renegade and dynamic spoken word performances.

The night will be hosted by Danny Pandolfi (RTB) and Matt Abbott (N&T) and will feature some floor spots from the best local talent.

Salena Godden is one of the UK’s foremost poets, having stormed stages worldwide for the last 25 years. Her ‘LIVEwire’ album was shortlisted for the prestigious Ted Hughes Award in 2017 and released by Nymphs & Thugs on 2LP gatefold vinyl, CD, zine and digital format. Her ‘Pessimism Is For Lightweights’ pamphlet with Rough Trade Books took the poetry world by storm last summer.

Salena has also published ‘Fishing In The Aftermath (Poems 1994-2014)’ with Burning Eye Books and literary memoir ‘Springfield Road’ with Unbound, and also contributed her essay ‘Shade’ to international hit ‘The Good Immigrant’ in 2017 (Unbound).

Jess Green is a performance poet and script writer. She has performed at Glastonbury, Latitude and Bestival and written two shows (both published by Burning Eye Books), Burning Books (2015) and A Self Help Guide To Being In Love With Jeremy Corbyn (2018) which received 5* at the Edinburgh Fringe and on their national tours. The stage adaption of Burning Books toured in 2018 including a performance at NUT National Conference. She is the 2018 BBC Slam Champion and part of BBC Writers Academy 2019. A Self Help Guide tours the UK throughout 2019.

Kevin P. Gilday is an award-winning writer and spoken word artist from Glasgow, Scotland. He is the curator and co-host of spoken word cabaret Sonnet Youth, a National Theatre of Scotland Breakthrough Writer and a BBC Writersroom Scottish Voice. Kevin has performed all over the world, from Hollywood to East Kilbride, including major festivals and fringes as well as large scale tours of the UK, Germany, Canada and the US.

He has published four books of poetry, with his most recent - Sad Songs for White Boys (published by Speculative Books) - bringing together nearly ten years of work. His debut album under the guise of Kevin P. Gilday & The Glasgow Cross, Experience Essential, was released in 2018 on Iffy Folk Records (Glasgow) and Nymphs & Thugs Records (London). His show Suffering from Scottishness played to critical acclaim at this year's Edinburgh Fringe. 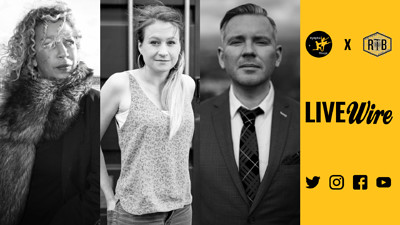