To kick off Raise the Bar's new season of events, we're back at Arnolfini to present one of the most highly anticipated books in spoken word, Stage Invasion published by Out-Spoken Press.

Having had some of the world's most prolific performance poets grace our stage in the past 5 years, we're thrilled to present this extra special event exploring the role of spoken word in UK culture and society.

Spoken word performer and author of the book, Pete 'The Temp' Bearder will deliver an enthralling talk and performance.

A ground breaking new book which explores the unwritten history, science and skill of spoken word and answers some strangely under-explored questions: What is the history of performance poetry in the UK? How does emotional contagion happen in live literature? What has spoken word got to do with hypnotism and ecstatic states? This crucial and highly accessible book explores a thriving ecology of artistry, and how it can serve us for cultural, social and political renewal. The talk will also cover themes of protest, punk movements, the influence of hip hop, the crucial role of a live audience, and the radical history of spoken word.

Pete Bearder is a spoken word poet, comic and musician whose work has been featured on BBC Radio 4, The World Service and Newsnight. He is the former National Poetry Slam Champion and has performed around the world with organisations such as The British Council. His first collection ‘Numbered Boxes’ was published by Burning Eye Books in 2017, and in 2018 he was awarded The Golden Hammer Award for services to spoken word. This year he releases a new book about performance poetics with Out-Spoken Press: ‘Stage Invasion: Poetry, Renewal and the Spoken Word Renaissance’.

Vanessa Kisuule is a writer and performer and Bristol City Poet 2018-2020, who has won over 10 slam titles including the UK National Slam in 2014. She has worked with the Southbank Centre, RADA, The Bristol City Council. Knee High Theatre and Warner Music, and had her work featured on BBC iPlayer, BBC Radio 1, Radio 4's Woman's Hour, The Guardian, Sky TV and more. Her poetry collections 'Joyriding The Storm' and 'A Recipe For Socery' are both published by Burning Eye.

Chris Redmond is a poet, musician, performer and producer, and the founder and frontman of legendary spoken word show Tongue Fu where poets, comedians, storytellers and rappers perform with improvised music and films. This year Tongue Fu celebrated its 10th anniversary. A regular at music and literature festivals both nationally and internationally, Chris has been featured on BBC Radio 1, BBC Radio 4, XFM, CBBC and Sky Arts. Chris’ debut collection ‘Let The Pig Out’ is published with Burning Eye.

Lucy English is a Reader in Creative Writing at Bath Spa University where she is head of the Creative Writing Research Centre. She is a spoken word poet and novelist. Lucy is currently creating a digital project, The Book of Hours, a reimagining of a medieval book of hours in poetry film format. The Book of Hours contains 48 poetry films created in collaboration with 27 collaborators from Europe, America and Australia. Lucy English has written and performed in two major UK spoken word theatre shows. 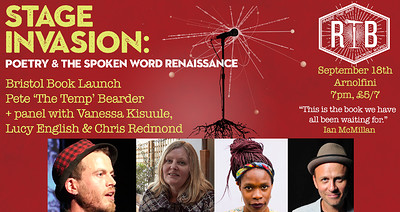