Known for making performance and increasingly writing, Newman's broad-ranging work explores humour, subjectivity, documentary practices and fiction. She create performances, interventions, music and texts and has made work in nightclubs, shops, on trains and marches, as well as for the concert hall or gallery. She works in a range of media including photography, video, textiles and sound.

During her self-appointed 2011 London residency, Newman wrote the novella Common, chronicling one day in the city, replete with social, economic and ecological crises - crashes in global markets, turbulence in the Euro-zone, and riots on hot summer nights. 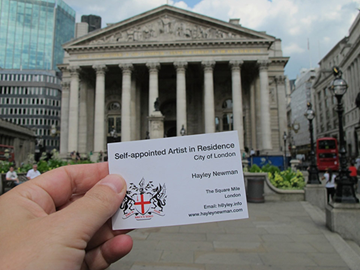