After selling out throughout the UK and in Australia, International Joke Off is now returning to Bristol!

In one corner, there is Alf from Devon. Alf’s sharp one-liners and zany prop-based comedy got a standing ovation from Britain’s Got Talent judges, and was then followed by millions of YouTube hits.

In the other corner, there is Richard from New Zealand. Richard is the world’s premiere flute comedian, and his joke-writing abilities have been compared to TV’s Milton Jones, but his flute playing has not been compared to James Galway.

The joke-writing havoc will be held together by the quick witted and hilarious compere and adjudicator, Richard James. And as a bonus, there will be special guest performances by Jesse Nixon, Abi Clarke, and Burt Williamson.

There’ll be more jokes than anyone could expect of an evening out.

"I haven't laughed that much in ages!" - Rob
"What a blast! Recommending to all my friends." - Brent
"It was so funny I almost wet my pants." - Emma
"Good, fun, honest comedy." - Sarah
"Made my sides hurt from all the laughing." - Jeremy 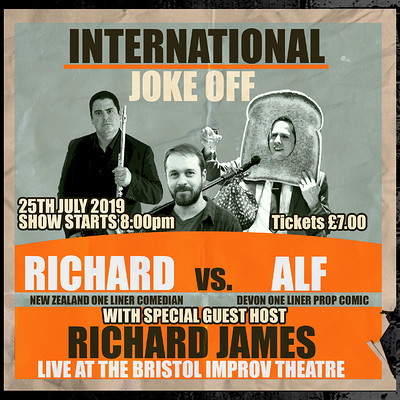