Hawthonn are Leeds-based duo Layla Legard and Phil Legard. Having collaborated since 2010, they officially formed Hawthonn in 2014 to deepen their uniquely imaginative approach to music-making. Often developing from obsessive explorations of a particular theme, their work precipitates dreams and imaginative journeys, which inform the direction of their music. Their earliest music explored the afterlife mythos of Coil’s Jhonn Balance through the image of the Hawthorn tree and Cumbrian landscape where his ashes were scattered. Their most recent album Red Goddess (of this men shall know nothing) views madness, magic, mugwort and menstruation through a feminist lens. Their approach draws lyricism from the psychoacoustic phenomena of ‘phantom words', develops sonic textures by translating geographical space into droning sound spectra, and verbalises dream imagery.
hawthonn.wordpress.com

Cristián Alvear is a Chilean musician dedicated to the performance, premiere and recording of avant-garde and experimental music. He serves as co-curator of Relincha Festival, venue exclusively devoted to experimental music, in Valdivia, Chile. Since the beginning of his career he has been constantly performing in the main auditoriums and concert halls of his country as well as international festivals and concert venues. Over recent years he has concentrated its efforts in performing educational concerts in rural areas of The Lakes region, located in southern Chile. His work has been published by Edition Wandelweiser Records (Germany), Irritable Hedgehog (USA), Cathnor (UK), Rhizome.s (France), Potlatch (France), 1000Füssler (Germany), Lengua de Lava (Mexico), Caduc (Canada), Melange Records (Japan) and in 2016 in Erstclass (USA).
cristianalvear.com

James Saunders is a composer with an interest in group behaviours and decision making. He performs in the duo Parkinson Saunders, and with Apartment House. He runs the Open Scores Lab at Bath Spa University. His Location Composite series usefully bypasses field recording – the barest minimum standard for engagement with sound and place, site specificity by default – by abstracting text scores from locations via intermediaries. Listening scores are hidden in the environment and geocached, found and realised by individuals whose resulting texts are compiled and passed to musicians as instructions for performance. This process of transmission and transformation recalls Robert Smithson’s non-site concept, in which “one site can represent another site which does not resemble it.” For this 10th anniversary concert, Bluff Aggregates will perform Location Composite #3 using only recordings of previous Bang the Bore concerts at Café Kino.
james-saunders.com

Bluff Aggregates is a new Bristol group with a transitory line-up dedicated to complicating, disregarding or wrecking the act of performance. One member takes the bench and pronounces the terms; the others are made to deal.
nolink.noprofile.nopresence

Bang the Bore’s 10th Anniversary concert revisits milestones from our ten-year history of concerts in Bristol, Leeds and Southampton.

Prior to commencing their Hawthonn project, Layla and Phil Legard played for Bang the Bore as the Xenis Emputae Travelling Band in Southampton in 2011, delivering a vowel singing performance inspired by the work of Peter Michael Hamel and Joscelyn Godwin. They subsequently contributed to an early version of Bang the Bore’s collaborative composition ‘Twelve Tapes’ in 2012, taking part in the first eight-hour durational performance at Bradford’s Gallery 2. For this anniversary show, the 2016 recording of ‘Twelve Tapes’ released by Bristolian satirical field recording label Every Contact Leaves a Trace will be played back between performances.

We featured a performance of James Saunders’ ‘Location Composite #1’ at Displacement Activity, our 2013 concert at Southampton’s John Hansard Gallery celebrating the work of Robert Smithson and Nancy Holt. For this performance of ‘Location Composite #3’, Bluff Aggregates will perform the work using only audio recordings of previous Bang the Bore concerts at Café Kino.

The last time Cristián Alvear played for us was at Café Kino in September 2015. Coincidentally, this was also the last time that Bang the Bore founders Seth Cooke, Clive Henry and Daniel Bennett played together on the same line-up. 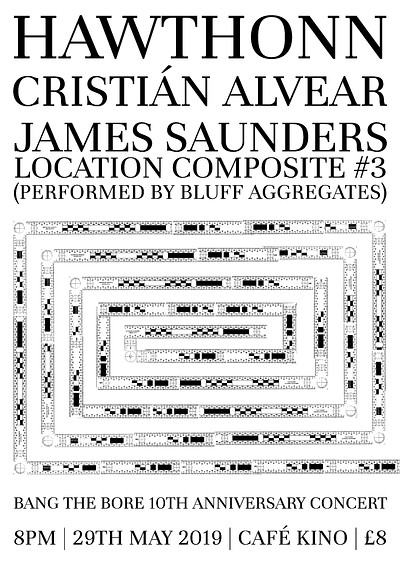