A night of ethereal Indie Folk at St John the Baptist’s Church. Four brand new artists from Cambridge, Manchester, Hastings and London have culminated in Bristol and will be taking over the gorgeous venue.

For anyone who hasn't been, the church is the little hole-in-the-wall just off Broad Street, under the arch on Nelson Street. It's the perfect venue for an intimate and intense night of music. It's also a major part of Bristol’s cultural heritage, with its stunning Gothic city gate and elegant perpendicular spire.

Food and snacks (wine, beer, cider, tea and soft drinks plus some sweet treats) will be served until 23:00.

The hosts of the night, 4 piece "Atmospheric Indie" music makers - previously known as ALBA are relaunching with a new name and material. Expect immersive sound, rolling drums, intricate guitar riffs and soaring vocals that create expansive, emotive and exhilarating soundscapes. Currently Ålesund are working with producer Jake Bright, creating a record due to release later in the year.

Blending soulful melancholia with the controlled artistry of a classically trained singer, Hannah Nicholson gives voice to the light and dark of human emotion. She has crafted her own individual musical identity: a blend of choral, electro and folk, stitched together with a thread that runs from J.S. Bach to Jane Weaver.

Upbeat singer songwriter Brook Tate’s songs somehow compress big drama into tiny tales whose whimsical subjects actually speak of the big things in life. It’s all quite jolly, but it makes you think, too.

Bristol based singer songwriter Gina Leonard has made a big impact on the Bristol circuit with her stark lyricism and emotive delivery. Her music has been described as contemporary folk and she has been compared to the likes of Daughter, Laura Marling and Lucy Rose. 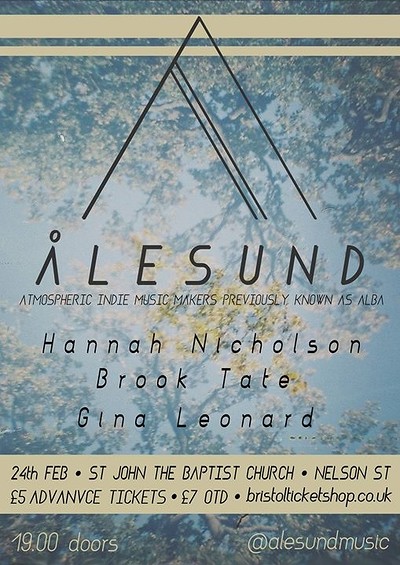