Tarot Reading at Cloak and Dagger

— The Cloak and Dagger
Tarot Reading with the Tarot de Marseille
price: £10

On Wednesday the 20th of July the Cloak and Dagger is pleased to host the sibylline Mireinart (Marta Isabella Reina) who will be reading tarot alongside the open mic night. Come on down and see what the cards have in store for you!
The event is a special opportunity to approach tarot culture by the use of the Tarot of Marseille, a deck that traces its origins back to 15th century northern Italy and southern France.

TAROT DE MARSEILLE - TAROLOGY
The origin of the tarot dates to the 14th century in Italy where they were used both for sacred and ludic purposes. The cards were depositories of important moral teachings belonging to the late medieval and renaissance culture and inheritance of ancient knowledge. It is in the 17th century that the tarot, in particular the Tarot De Marseille, became popular as a tool for divination. The uses of tarot cards are constantly evolving and since the last century, also in relation to the emergence of psychology, they became a tool to complement therapy and for encouraging processes of personal evolution and development. It is from the particular point of view of Tarology - an approach to tarot reading where the cards are conceived as symbolic-imaginative tools for inner development - that the readings are offered.

BOOKINGS & PRICE:
A limited number of bookings is available for the first 3 hours, to reserve one please email tarot@mireinart.com.
Every reading last 20-30 minutes, and it is offered at a price of £10 (cash and card are both accepted).

MIREINART / Marta Isabella Reina
Marta is a visual artist, musician, and performer who works on symbolism, folklore, magic, mythological and religious imagery. She started studying tarot years ago in Italy following her interest in medieval and renaissance symbolism. She attended lectures and courses and has been trained according to Jodorowsky's distinctive approach to tarot reading alongside the therapeutic practice of Psychomagic.
She has a background in design (PhD), and she is now doing independent research about mutual dreaming (www.doppelnovelle.com). 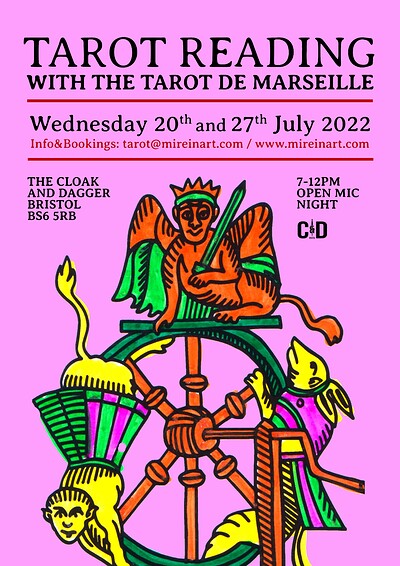