"I really like your songs...I want to hear more." Michael Eavis, Founder of Glastonbury Festival

Lespectre are an atmospheric dream-pop band from Bristol. The five-piece began life as an experiment in
songwriting for Tom Hackwell (guitar, vocals) and Max Perry (drums) – a vague attempt at creating something phonically reminiscent of the dream-like verse of Clarice Lispector (the name ‘Lespectre’ is an homage to the work of the Brazilian writer).

The full band took shape with the addition of Becky Leach (vocals, keys, violin), Gary Walker (guitar) and Sam Winter-Quick (vocals, bass). The illusionary, atmospheric shoegaze sound of Lespectre was born.
Debut EP Atmospheric Dream-pop From Bristol was released on 11 April 2019 via Deaf Endling Records. Its
five songs fit into the ethereal dream-pop tradition, but push at and transcend those boundaries, existing as Deluezian multiplicities.

Fans of the sleepy splendour of bands such as Cigarettes After Sex, Mazzy Star, Phosphorescent and Phoebe Bridgers will find much to love here. The coruscating, sun-dappled 30 Fathoms finds the band evoking the strident guitar sound of The War On Drugs, diving deep down into Lake Zarathustra with Tom “Out in the deep, finding solace in the eye of a stranger”.

Impossible has become an irresistible ear-worm at the band’s Bristol shows, a tale of a doomed relationship told through Max’s enduring love of the philosopher Michel Foucault, whose tattoo adorns his snare arm. Elsewhere, If On A Winter’s Night, A Traveller Comes, nods to the postmodern novel of the same name by Italian author Italo Calvino.

Follow-up single Lost With You, an arresting foray into Motown territory led by Winter-Quick’s insouciant bass line joined soon enough by a wall of dreamy doo-wop harmonies and reverb-lavished guitars, has already been picked up by BBC Introducing prior to its December release. The band have also reached the finals of the Pilton Stage competition for a place on the Glastonbury bill and are now booking up dates for spring and summer 2020.

“Fleetingly it’s here with me/ Clear as day from the night,” sings Tom on the EP’s signature track Sleep, While I. Yet with Lespectre things are rarely that concrete, the ephemeral shimmering tantalisingly into focus before evaporating just as quickly, instruments and vocal harmonies melting into each other mirage-like.

Moments such as this ebb and flow aplenty throughout Atmospheric Dream-pop From Bristol.

Equal parts reflective and energetic, Echo Hotel mix tightly-round rhythms and fitful guitars with a chronically self-aware lyricism into genre-hopping alternative songs - heartfelt in their introspection and almost caffeinated in their nervousness. 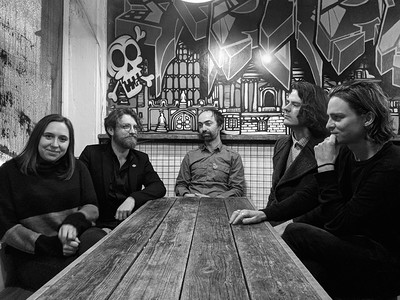