For our first Bristol dance this year Eminent are pleased to bring you one of the world’s preeminent DJs to Noche Negra for her Bristol debut: Alienata.

Alongside running her Discos Atónicos imprint, responsible for Dez William’s ‘Running Circles EP’ last year, Alienata is quickly establishing herself as a headlining force to be reckoned with, known for her style of gritty electro, techno, EBM and acid.

2018 saw her collaborate with Mumdance, Sync 24 and B. Traits, and she’ll soon be performing alongside Detroit electro pioneers Aux 88 and dark-electro titan DJ Stingray for Helena Hauff’s ‘Return to Disorder’ at E1 London in March, as well as playing Dimensions Festival for the first time later this year.

We’ll also be bringing our own Funktion-One system to power up the 100 cap venue so you can guarantee that this is set to be one to remember!

Support on the night will be provided by residents Yushh & Tramma, two DJs who have been hard at work over the last year with a series of standout individual performances and slamming b2bs. 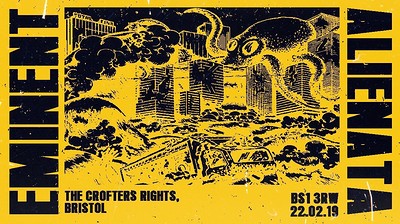