Stoked to showcase a co-headline extravaganza featuring Huntsmen and Wolftooh.

Huntsmen have returned to add a dynamic new chapter to the rich and varied tradition of great American storytelling. Mandala of Fear, massive in scope and spanning two full LPs, explores themes of trauma, recovery, and - ultimately - survival, through the lens of a fully formed sci-fi-esque tale set in the near future as unending desert war crumbles into apocalypse. Having enlisted Aimee Bueno to provide vocals for the final track of American Scrap, her role has since evolved into being an equal participant in the Huntsmen adventure.

Whilst storytelling has been - and remains - at the core of all that HUNTSMEN is, they continue to dissolve the boundaries between metal and the more traditional modes of folk and country. Americana-metal still rings true as a descriptor, from the opening bars through to the denouement of the album a full 85 minutes later.
Recorded at Decade Studios in Chicago with Sanford Parker occupying the producer’s chair, Mandala of Fear was laid down over two weeks in April 2019.

Parker’s own love of true American storytellers such as Waylon Jennings further imbued the spirit of the tradition into every crevice of the album, while his leanings toward icy electronic music provide a chilling and gut-wrenching counterpoint. Paired with HUNTSMEN’s past-and-future timelessness, the result
is breathtaking and devastating.

Richmond, Indiana’s Wolftooth launched onto the scene in 2017, swiftly grabbing the attention of fans, tastemakers and industry alike. Now, building upon the subterranean success of their lauded previous albums (2018’s Wolftooth and 2020’s Valhalla), the band unveils their colossal full-length Napalm Records debut, Blood & Iron, out December 3, 2021.   Offering an immense slab of proto-metal influenced heaviness with a deep dose of doom essence and addictive stoner riffage, Blood & Iron isn’t just epic in sound, but at heart. The album travels through a treasure trove of fantasy-themed lyrical influences – exploring mystical and often treacherous themes of mythology, lore and legend with a focus on sorcery, battle and non-stop adventure. Recorded, mixed and mastered by producer Jeremy Lovins, Blood & Iron is a true nod to classic, feel-good American heavy metal with modernized flair. Today, listeners can get a first taste of Blood & Iron with victorious first single “The Voyage”, accompanied by a brand new music video filmed in Indianapolis, Indiana by Mike Yonts. Fists will be pumping within the first few notes as the track triumphantly gallops forth with chugging riffs, soaring vocals, piercing basslines and powerful melodies. 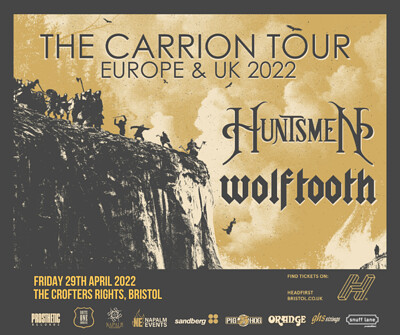