Welcome the UK's finest extreme, noise riffslingers as we host three of this country's very best!

Hailing from Manchester, the band have topped the scene since forming in mid-2017. Dropping their debut EP, "Nothing Will Grow From The Rotten Ground" they showcased an intense 9 minutes of pure hatred and ignorance, while providing a sound not heard before. Heavy Blog Is Heavy called the EP "as cheery as its title suggests. A blanket made of steel wool and crushed dreams will wrap around your shoulders for the short duration of this debut."

Signing to Prosthetic Records in early 2018, Less than a year after the first EP, the band released their debut full length album "You Took The Sun When You Left" in the fall of the year. Leeched supported the album touring with some of extreme music's most relevant artists including Employed To Serve and Full Of Hell.

Having already played on the same bill as Napalm Death, Vader, Venom Prison and more; LEECHED are quickly finding their feet with a unique sound while combining influences from many forms of extreme music.

Since their birth from the grey and unforgiving North East of England in 2014, Geist have established themselves as a force to be reckoned with in the UK underground, playing a feral mix of dark hardcore, crust and metal. They have toured extensively, both independently and with international acts, whilst gaining a reputation for an impressive live show that has been described as a "claustrophobic assault on the senses", and have been hailed as "one of the best hardcore bands in the UK".

With five releases under their belt in as many years, including their first EP, two splits, a live session and the acclaimed 2017 release Disrepair, this tight knit unit has shown no signs of loosening their choke hold on the underground scene as Geist, in collaboration with Cursed Monk Records, are about to release their first full length, entitled Swarming Season, in September 2019. 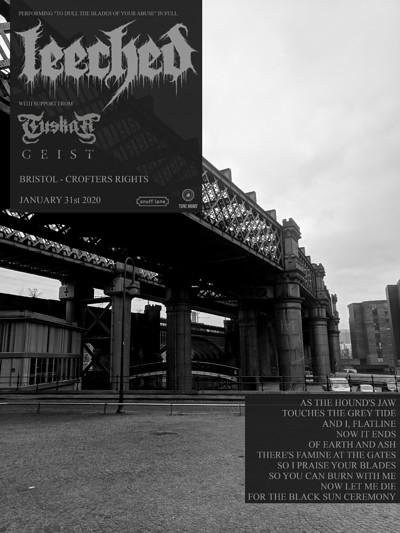