Don Kipper are a multi-award winning sextet led by the formidable Greek-Serbian singer Dunja Botic. Propelled by a rhythm section featuring some of London’s jazz scene’s most innovative musicians they create an explosive and contemporary sound drawing from modern Romani music, bone-deep rural folk traditions and relentless rhythms from North and West Africa. As part of a generation of musicians with access to the world’s songbook, and rooted in one of the world’s most cosmopolitan cities, their influences are rich and varied. They’re inspired by the music found on dusty Eastern European wax cylinders, pirate CDs from downtown Dakar, and shaky handheld videos of the rawest wedding music from across the Mediterranean and the Caspian Sea.
Within the ensemble Don Kipper have a range of musical roots and routes. From childhood obsessions with Klezmer, to song collecting around the Mediterranean, and cutting edge Jazz jam sessions in South London, they each bring their diverse histories and passions to the new sounds they are establishing. Some members are formally trained, while others play entirely by ear, or learnt their songs from Greek grandmothers. This is a band that draws on both ancient traditions and the modern, migrant cultures of the city they call home. They love traditional musics, but they’re not traditionalists.

Roberta Pia (Banana Sessions) - Singer, songwriter, DJ, and co-founder of the brilliantly weird Banana Sessions. Roberta Pia sings honest songs about the highs, the lows, humans, the world, and back in the day when jukeboxes weren’t shit. 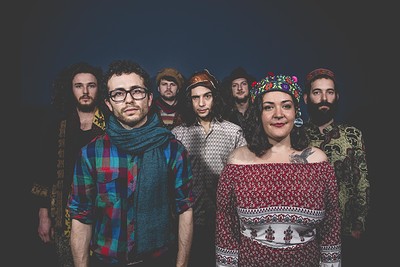