Now that raves are coming back it only seems right to announce our first Bristol Too Ill event! We’ll be taking over The Crofter’s Rights for a night of deep, dark and heavy Drum & Bass.

Critical Impact:
With tracks such as Pretty Girl, The Creeper and Pitch Black it’s fair to say Critical Impact has quickly cemented himself as one of the key names in the UK scene. After spending the last year working away on a whole range of new productions, we’ll be bringing him down to headline the night with his first post-lockdown set in the city! Expect deep rolling basses, hard hitting drums and plenty of dubs x

Stillz b2b Posk:
Despite a severe lack of events and raves, both Stillz and Posk made their mark on the scene in a big way in 2020, with releases on labels such as Kingpin, Audio Addict and Grid recordings. Catch them going back to back for the first time for an hour long fusion of jump up and rollers. 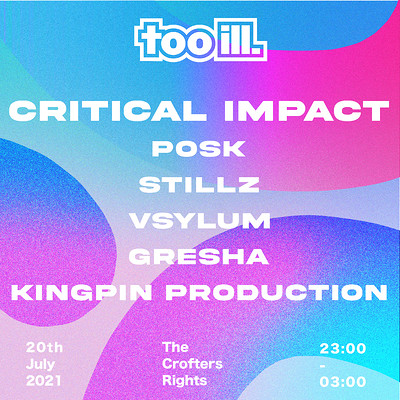