The future of British extreme and progressive metal lies in safe hands with the stunning debut LP from Conjurer; 2018's Holy Roar Records released 'Mire'. The albums' 43mins / 7 tracks combine Opeth at their heaviest and most dynamic, Mastodon at their earliest and Gojira at their most venomous. Equal turns bleak, dark, stark and beautiful, 'The Mire' is an album that makes true the cliché "a journey of a listen".

Conjurer have attracted plenty of attention from the metal press and industry and have an impressive tour history, all despite still being at the very beginning of their journey. Since their set at Effigy Weekender 2017 - alongside the likes of Employed To Serve, Brutus, Big Business, Whores. Bossk, Svalbard - they now have past and upcoming US tours with Rivers of Nihil, Revocation and Psycroptic to their name, not to mention tours alongside Oathbreaker, Weedeater, Conan, Venom Prison and Rolo Tomassi, plus appearance at the likes of Download, Roadburn, Damnation, ArcTanGent, Tech-Fest and more. They certainly keep good company!!

Their upcoming new album will see a worldwide release through both Holy Roar Records and Nuclear Blast and promises to be another milestone is an already glowing journey.

Support comes from Earth Moves and Armed For Apocalypse. 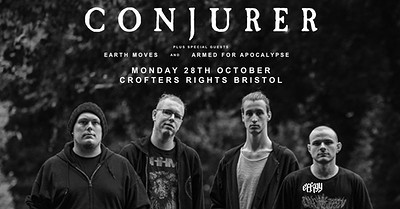