It's unfortunate news that we're to announce that due to the current effects and concerns of COVID-19; Cult Leader has taken the decision to postpone their EU/UK tour.

The event will not be going ahead and will now be postponed.

"We obviously have to cancel our European tour, hopefully, we can reschedule. Thank you for your support and understanding.
Stay home. Yes, that means you. COVID-19 isn’t hype. We have to come together and the first part of that is staying apart.

There are already a lot of people hurting from this immensely, so do what you can to support them."

Based on the platform you purchased your ticket from will determine how refunds have/will be issued.

Customer will be refunded accordingly:

Headfirst
"Refunds have automatically been applied for all ticket holders.
It takes 10 working days for refunds to return to customers bank accounts."

American progressive crust metallers CULT LEADER return to Bristol for an extremely intimate appearance in preparation for their appearance at Roadburn 2020.

Bringing with them Bristol favourites the nuclear-sludge-duo TUSKAR who will prove to be the perfect companion with their signature fierce blend of atmospheric doom/sludge.

In May 2013, two months after the break-up of Gaza, former members guitarist Mike Mason, drummer Casey Hansen and Anthony Lucero – who was Gaza's bassist, but switched to lead vocals for this project – announced they formed a new band called Cult Leader, and recruited Sam Richards on bass. They decided on the name Cult Leader because it conjured up vivid imagery, and Lucero commented: "A friend of ours actually suggested that and my brain lit up. I loved all the references and all the meanings."

Cult Leader released its debut EP Nothing for Us Here on April 15, 2014 through Deathwish Inc. The release "came together" in about a week, and the band was considering self-releasing the album for a while. They sent a copy to their friend Jacob Bannon of Converge to see what he thought of the music, who in turn suggested that Cult Leader release the EP through his own label, Deathwish. The title of EP was, in part, a reference to Gaza's break up. Nothing for Us Here was met with generally favorable reviews upon release, and Cult Leader toured the US in April–May 2014 in support of it.

In November 2014, Cult Leader announced their plans to release a 7" EP and a full-length studio album in 2015. The 7" is a three-song EP titled Useless Animal that will be released on June 16, 2015 through Deathwish. The EP notably featured a cover of Mark Kozelek (Red House Painters, Sun Kil Moon) and Deathshore's collaboration track "You Are Not My Blood," which originally appeared on their 2013 album Mark Kozelek & Desertshore. Before the release of the EP, Cult Leader toured across the US as they traveled from Utah to producer and Converge member Kurt Ballou's GodCity Studio in Massachusetts to record their first full-length album in March 2015, and continued to tour North America through May 2015 immediately after recording was finished. The full-length album, titled Lightless Walk, was released on October 16, 2015 through Deathwish followed by an October–November 2015 supporting North American tour.

Hailing from Manchester, the band have topped the scene since forming in mid-2017. Dropping their debut EP, "Nothing Will Grow From The Rotten Ground" they showcased an intense 9 minutes of pure hatred and ignorance, while providing a sound not heard before. Heavy Blog Is Heavy called the EP "as cheery as its title suggests. A blanket made of steel wool and crushed dreams will wrap around your shoulders for the short duration of this debut."

Signing to Prosthetic Records in early 2018, Less than a year after the first EP, the band released their debut full length album "You Took The Sun When You Left" in the fall of the year. Leeched supported the album touring with some of extreme music's most relevant artists including Employed To Serve and Full Of Hell.

Having already played on the same bill as Napalm Death, Vader, Venom Prison and more; LEECHED are quickly finding their feet with a unique sound while combining influences from many forms of extreme music. 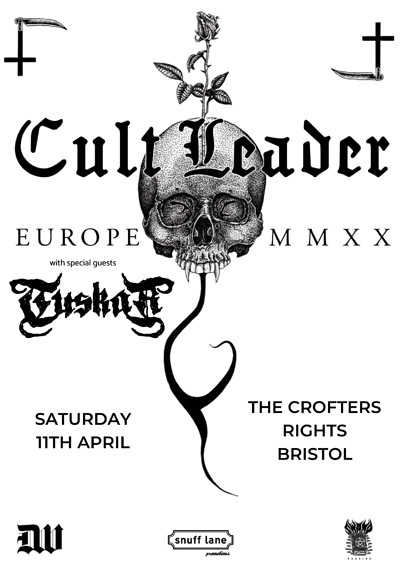