— Crofters Rights
PHAT Bristol are delighted to invite you to The Crofters Rights for an evening of stunning vocals, musical mastery and astounding lyricism
price: Tickets Below

GOYA - Goya are a Bristol based cinematic jazz band, rapidly gaining acclaim in the Bristol scene and beyond, having recently played to a packed house at the Tramlines Fringe in Sheffield. If you're a fan of GoGo Penguin, Mammal Hands and sumptuous grooves...Goya are the band for you.
(www.facebook.com/goya.jazz)
OTIS MENSAH - The abstractionist rap-hymns of Otis Mensah are a force to behold. Otis is able to draw every last breath of poetry out from his waking life, turning the mundane in to the magical with a real eye for insight. Creating alternative hip-hop verging on spoken word poetry, Otis' combination of chilled beats, sincere lyrics and pastoral presence are an experience to be felt. This is Otis' first ever Bristol show, and he's hotly tipped to blow up in a big way...do not miss out.
(www.facebook.com/itsOtisMensah)
t l k - Tara is the eponymous brainwave behind t l k...she is a fantastically talented multi-instrumentalist, an almost paranormal vocalist and a visionary producer. Having crafted her sound over the years, Tara's full band shows are receiving high levels of widespread acclaim which is why we're so lucky to have her down with a solo set! A perfect start to a perfect evening...
(www.facebook.com/tlkvox)

DANNY BURRITO - Danny Burrito is fast emerging as one of the most exciting and explosive rappers in Bristol. Danny’s versatility, coupled with his ability to dissect and rhythmically redesign sentences are attributes that Danny learned from his influences, ranging from the likes of Chance the Rapper, MF Doom, and Eminem, to artists such as Wretch 32, Kano and The Streets.
(www.facebook.com/Danny-Burrito-100111108449276/)
Tickets will be going LIVE on Monday 6th September...
Limited first release tickets at £8...
Second release tickets at £9.
£10 on the door.
Can't wait to see you there ❤ 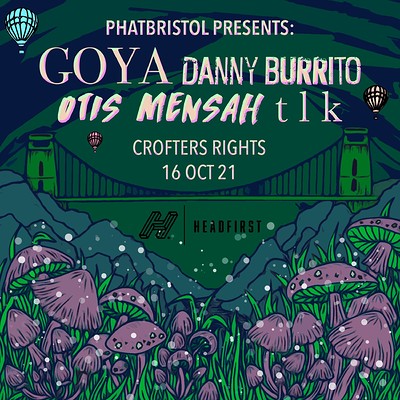