Fuelled By Cider's favourite folk-punkers return to Bristol with an unquenchable thirst for good times and booze, sweet booze.

Smashing their way into the UK folk punk scene since 2013, Black Water County bring an energetic live show of stout quaffing, banjo breaking and tin whistle mangling original music, along with trads and shanties that have been given a good kick up the arse and a slap around the face.

Their live shows, which feature the dual lead vocals of Tim and Shan, are a thing of local legend and awe in their home county of Dorset, usually ending up with band members scattered throughout a frenzied crowd or a shoulder-mounted fiddle solo, to name but a couple of eventualities.

The band have recently released their debut album, TAKING CHANCES (released February 2017), the first taste of which came in the shape of the preceding singles, ‘One More Beer Won’t Hurt’ (released May 2016) and ‘Start Something New’ (released January 2017) and has since been followed by The Painful Truth (released June 2017).

Support comes from Bristol's own Cut Throat Francis, a band making a name for themselves on the local scene for their gypsy/swing/jazz sound. Supports with the likes of Imprints and The Baghdaddies and upcoming festival appearances including Outcider Festival have earmarked the band as a definite 'one to watch' for 2019.

Online and in person from Bristol Ticket Shop 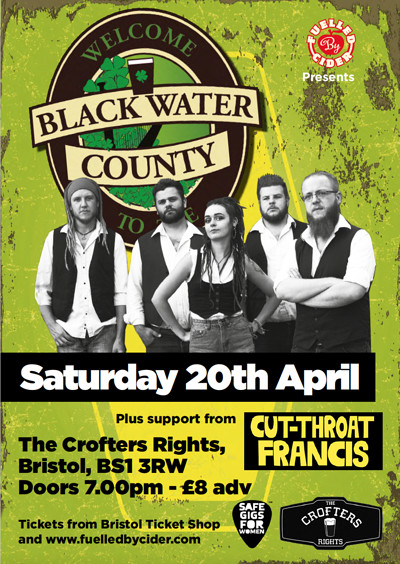