Afraid of The Radio are psyched to return to Crofters, hosting best buds The Malago Ballroom and Jakabol, joined by the excellent lads of Muncle. This is set to be an eclectic night of alt, indie, post-rock, and folk from three bands who love to blur the lines. Here's a blurb for ya:

Their unique and eclectic alt-indie songs fuse walls of noise, angular driving grooves, pop singalongs, and atmospheric instrumentals to energise and uplift the listener. Over the past year they have earned support slots opening for Valeras, Flight Brigade, and Port Erin, as well as receiving airplay from local radio stations including BBC Radio Bristol and BBC Introducing in The West. They have garnered consistently favourable reviews from music publications including Bristol In Stereo, Louder Than War, and Tap The Feed who ranked the band's EP Launch in their best gigs of 2018.

“Impressive, bold and outgoing with great songwriting”
- BBC Radio Bristol
"The Malago Ballroom, as a name, sounds grand and spacious, a quality you could ascribe to their soaring indie rock tunes"..."there aren’t many new bands that are likely to get you into as much of a lather as these energetic indie craftsmen"
- Bristol Live, magazine
"They are very animated and like to move around when they are playing." - Anon.

Muncle is the Mr Hyde of a polite, down to earth and honest working individual. Not in a science lab, but at the back of a Bristol administration office one groundhog day after the next, Mike Griffiths found himself forging a collection of frustrations that needed a voice. Muncle transforms what many would consider to be the ‘very ordinary’ into something wondrous and to be celebrated with guitars and drums. For fans of Foo Fighters, Weezer, and angsty up-lifting pop-punk anthems with rousing three-part vocal harmonies.

Following the release of their long-awaited debut EP at the start of November, the band will grace the Crofters stage to present select tracks and test out some new material. Inspired by the energy of artists like Mahavishnu Orchestra and King Gizzard & The Lizard Wizard, Jakabol are an experimental 4 piece instrumental wonder. Consisting of harp, violin, drums, and guitar they fuse world folk influences with progressive textures and explosive riffs. 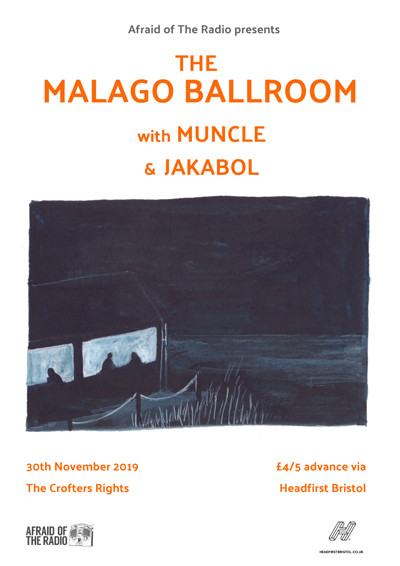