— Crofters Rights
Get yourself down to Crofters Rights for an epic night of indie rock. Featuring headline act The Ruby Tuesdays and guests
time:19:00
price: eventbright.co.uk

Get yourself down to Crofters Rights for an epic night of indie rock. Featuring headline act The Ruby Tuesdays and guests.

THE RUBY TUESDAYS
The Ruby Tuesdays are a rapidly growing force in the scene, having ripped up their hometown of Blackburn their fan base is becoming nationwide. Their live shows are full of energy, grit and raw power proven by the countless sold out shows they’ve had up and down the country.

PONYBOY AND THE GOLDENSOUND
PonyBoy and GoldenSound are a high energy bundle of fun.
Out of the Northern Peaks of England, Jake Lawson started the band as a solo project and has found some serious talent for his live shows. The band pushes a lo-fi sound that has a Texan Twang that cuts through their melodic 90s brit pop sound. Now based out of Bristol, this band is a must see for high-energy live performances that matches the quality of studio passion of their debut record “The Outsider”

WINE MORALS
Wine Morals is a band committed to going its own way in every situation. Originally from Swansea, the Alt Rock/Pop Band brings beauty, noise, and heat to every performance. 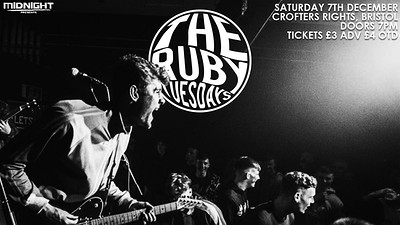