Welcome the return of intergalactic sludgecrushers SLABDRAGGER who will yet again prove they're heavier than a thousand bronze Buddhas.

In February 2016, the band released their second LP, Rise Of The Dawncrusher through Holy Roar Records. This was recorded and mixed by Sam Thredder at the Cro’s Nest Studio and mastered by Steve Austin (Today Is The Day) at Austin Enterprise Recording and Mastering.

PIST were brewed up in Bury in the December of 2013. Formed by a group of mates with a taste for heavy riffs and hard boozing they stepped straight on to Manchester's underground scene with the release of their aptly titled debut EP 'Riffology'. Shortly after this PIST started making waves within the UK underground as word spread about the EP and their 'anything can happen' live shows.

Having toured with numerous bands on the upcoming scene including BongCauldron, Gurt, Diesel King, Ten Foot Wizard and Widows, as well as sharing the stage with such household names as Napalm Death and Church of Misery. They were invited to play both Hard Rock Hell and Hammerfest, all of which occurred in a year and a half. PIST's debut album will see the lads return to Skyhammer Studio in September 2015 to work with their favoured producer Chris Fielding (Electric Wizard, Winterfyllth, Bast). Before then PIST will (dis)grace the Sophine Lancaster stage at this years Bloodstock Festival, with them opening on the Saturday! Expect their debut album to be released late 2015 as well as a UK tour in October with good friends Foetal Juice!

Three piece progressive death-sludge band from South Wales. They are heavy, dark and nasty sounding...but above all, really top guys.
- The Sludgelord

I've heard Tides of Sulfur before (well, a track (Sky Bastard) at least) yet more than once I have to check I'm listening to the right side of this split - my memory of instrumental riff centred doom not exactly matching what splurges forth. They've developed quickly, someone seems to have pissed on their picnic, as Lord of Flies is instantly darker, heavier and leant a menacing air with harsh vocals. It's not as if they've gone chest-beating, Crowbar-aping numbskullery either (like too many doom upstarts), the development in the black metal periphery. Their second offering is longer, and just as you feel it may drag thrashes about violently in old school blackened disgust, riffs rising. The production jarrs a little, it's a little raw around the edges, but it's overall impressive.
- ninehertz

A heavy progressive 3 piece from London with elements of stoner / doom / psyche.

They are driven to tell stories with their music, to enable lisners to conjure cinematic scenes in their minds, painting images with sparkling guitars, unconventional structures, sledgehammer bass and big fucking riffs. 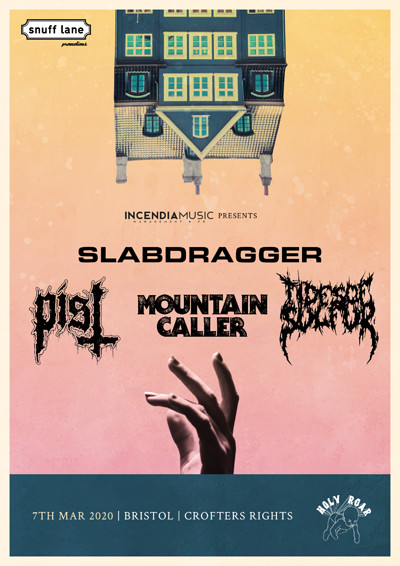