Andy Crofts embarks on a handful of rare solo acoustic gigs in December and we are pleased that a Bristol date has been included. As well as a longstanding member and integral part of Rock Legend PAUL WELLER'S band providing keyboards and currently bass playing duties he fronts his own highly regarded outfit The Moons who have released three highly acclaimed studio albums along with a live album and a string of classic singles including 'Something Soon' which featured Weller on vocals. A fourth studio album from The Moons recorded in a day at the legendary Abbey Road studios is scheduled for release in 2020 and this performance features tracks from the album along with some favourites from the bands back catalogue.

Come and enjoy a chance to hear one of the best British songwriters to emerge in the last ten years up close and personal. 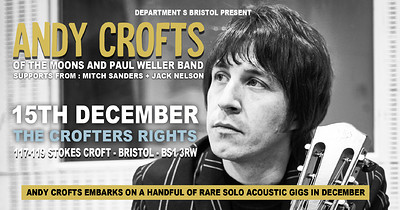