Headlining: ONOE CAPONOE
- Signed to the one and only High Focus Records, Onoe Caponoe is a truly unique artist & performer, with some serious skill on the mic, "from designing his own album covers to putting on his own art shows, tearing down live events to producing his own beats & directing his own videos – Onoe is a imaginative force like no other". Don't sleep on this one.

LAZY EYEZ
- Lazy Eyez has only been rapping for around three years but has already impressed on the UK’s underground scene, playing over 50 shows across the UK including festivals such as Leopallooza and Wonderfields, as well as as supporting the hip-hop legend GZA (Wu-Tang Clan...motherfucker) on his home-turf St. Ives in Cornwall.

SPRINGA
- Springa is an underground word-smith who channels elements of grime, hip-hop and trap in his music, resulting in a hard, authentic sound. Check out his latest album "Elevators" on Spotify. 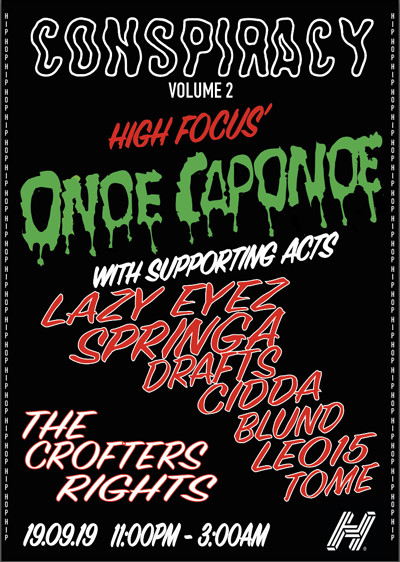