— Crofters Rights
Luo release their new album 'Unspoken' end of March, this is their Bristol album release on 02.04.2020 with support from Slugabed
time:19:00
price: Headfirst Tickets

Luo release their new album 'Unspoken' on March 27th, and will be performing the entire record in full for the Bristol album release on Thursday April 2nd at The Crofters Rights.

Were very lucky to have Slugabed join us for this night with his live band to weird us out with his unique approach to music making. Heres what he has to say:

Two friends, Greg Feldwick & Samuel Organ, wonder what they should do during a boring fall day in their town, Pitts Landing. After several proposals, the two agree to sneak into the mysterious Coffman House, an old dilapidated building that is said to be haunted. The building is also home to a strange man nicknamed Spidey. While exploring the basement, Greg finds a camera hidden inside a compartment in the wall. Greg is interested in photography, so he picks up the camera. He asks Samuel to pose for a picture. Samuel leans on a staircase railing. The moment Greg takes a photo, the railing breaks, and Samuel falls to the ground, hurting himself. 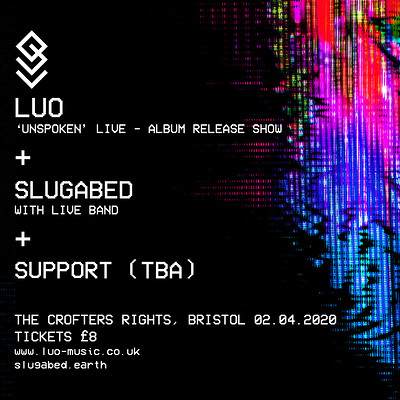