HUSH MOZEY
Hush Mozey is a four-piece band based in Bristol bringing together Ska, Punk and Garage music to create a sound they like to call Drowzy Rock and Roll.

JUNIOR BILL
The Cardiff/Bristol-based outfit's closest thing to a hometown show on their zig-zag national tour. At first glance, their set is a joyous high-energy conga of reggae, highlife, soul and new wave pop delivered with perfect exuberance by a terrific band. A guaranteed good time.

Yet, somehow at the end of the process there is always a sense of optimism and a feeling that Junior Bill are on hand to make the world a slightly better, and more fun place to be.

BEEFYWINK
‘Twisted and vicious’ Post-Punk from Bristol, BEEFYWINK derive their sound from a politically charged smorgasbord of genres. As well as the unmistakable snarl of both classic and modern Punk, influences include Hip-Hop, Dub, DnB and Drill. Polarising and witty, BEEFYWINK’s lyrics carry a fusion of flippant off-the-cuff remarks with philosophical guidance through our current political and social climate.

Beefywink are due to release their debut album in May 2020.
​
"Beefywink brought an instant explosion of sound and energy from the get-go that charged the packed room with an electricity usually reserved for seasoned punk bands"
The Bristol Gig Guide, 2020 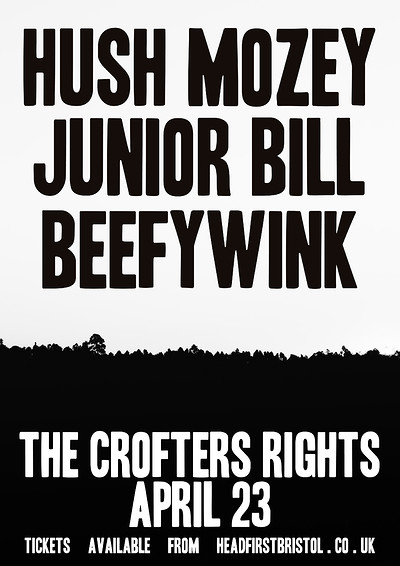