Lotus Family is excited to bring you London's mad progressive punk wizards The Display Team to The Crofters Rights as they celebrate the launch of their new EP.. With Support from Mutant-Thoughts and Flag Fen

The Display Team play the background music for the film adaptation of your sweatiest anxiety dreams; tunes at once horrible and beautiful, fighty and flighty, that rummage for a tiny shiny shred of hope in a bucket of stinking despair.

For fans of Cardiacs, Mad Caddies, The Beach Boys and Mr Bungle. they'll take you on a rollercoaster to make your mind bounce around with giddy joy.

Super excited to be bringing back our Favourite Progy art rockers

'A brilliant rhythm section is married perfectly with the atmospheric keys and synths of frontman Han Luis Cera, and it makes for a compelling and intruiging set indeed' - Planetmosh

'So much groove I had to be lifted out' - Richard Nasmyth, Mortishead

Flag Fen is a bio-electrical resistance project developed by former members of Bristol noise-beat outfit
Big Joan. In development since 2017, its roots lie in an unsettling encounter with a dissident
archaeologist some years earlier.

At great personal risk, project leaders Adam Burrows and Keith Hall combine music, words and imagery
to unlock the secrets of a Bronze Age settlement that was destroyed by burning, and the site’s
mysterious connection to major historical events of the last 40 years.

In April 2019 development resumed at a secret location following the destruction of vital equipment in a
warehouse fire. 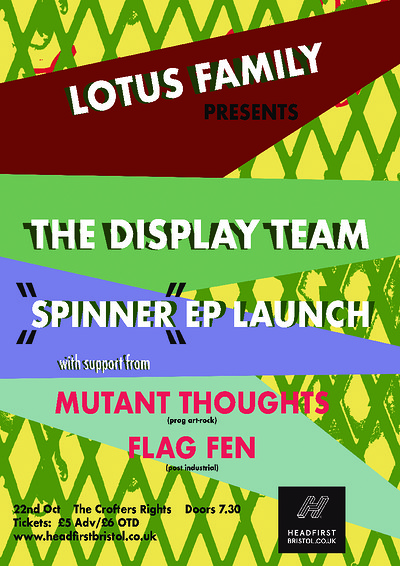