— Crofters Rights
We’re back at The Crofter’s Rights to bring you another night of UK Hip-hop & Rap music, this time with home-grown flavour from Datkid & Wis
time:23:00
price: Headfirst Tickets

We’re back at The Crofter’s Rights to bring you another night of UK Hip-hop & Rap music, this time with home-grown flavour from Datkid & Wish Master, two locals that have proven what Bristol has to offer to Hip-hop culture. The talented Springa, Drafts, Blund, Tome & LEO15 will also be gracing the mic on what is sure to be a sick night of great music and live atmosphere.
DATKID
& DJ Baileys Brown

“Bristol based Datkid first made his mark in the Hip Hop game in 2012 alongside the Split Prophets crew, and immediately made a huge impact on the scene. Gaining attention as a solo artist in 2013 with his first single ‘Home By 8’, an ode to life on tag, Datkid quickly became one of UK Hip Hop’s top prospects. With attitude by the bucket load and the skills set to match, Datkid has been churning out high quality music ever since, featuring on a plethora of projects as well as releasing his own monumental solo album ‘Teeth Ledger’ alongside producer Baileys Brown. Datkid has proven to be an exceptional MC, displaying the perfect balance of technical brilliance and hard-core ‘I don’t give a F***’ sensibilities – consistently stealing the show on any track he appears on.”

“Fast forward to 2019, Datkid has collaborated with fellow West Country dweller & Four Owls Producer Leaf Dog to create ‘Confessions of A Crud Lord’, possibly one of the most hard-core albums to ever grace the High Focus catalogue. “(High Focus)

This St Pauls born wordsmith is brimming with home-grown talent on the microphone, Wish is a hip-hop artist, based right here in the musical hotbed of Bristol. He has been dropping a steady stream of music for the past few years, including his debut album “Third Perspective” and his latest project “Wish Master”. Expect lots more to come from this MC… he is supporting the one and only Ghostface Killah (Wu-tang) on the 16th of November and has a new project “Boombap to the future” coming out soon. 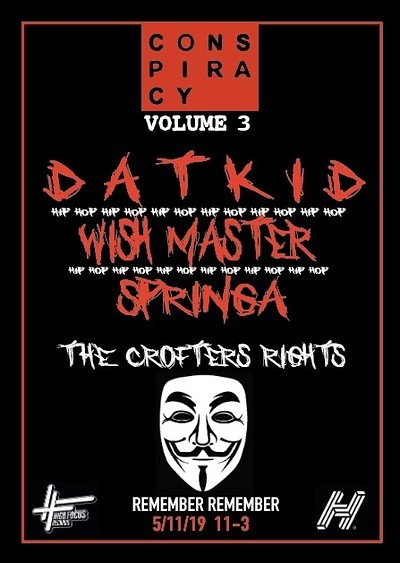