Expect the finest minimal drums & nasty bass with plans to completely dec out the back room with a multitude of ominous decorations, actors and free masquerade masks - come and see what goes on at an Exodus Ritual, for all.

Document One
Producers Matt King and Joe Froud, better known as Document One, have risen rapidly to become a serious force within the DnB Scene. Since 2010, they have continued to play global live shows in over 28 countries including tours with Borgore, Modestep and Ministry of sound. Document One have featured a number of guest mixes and interviews for BBC Radio 1 DJ’s; Mistajam, and Annie Nightingale.

The duo’s online presence is testament to their success, with over 48,000 fans on Facebook, total views on YouTube in excess of 9 million and their last release racking up over half a million plays on their personal Soundcloud alone.
Sl8r
The Brummie-born, Manchester-based artist has already built himself a stellar reputation, with a back catalogue that boasts releases on a host of labels including Delta9 Recordings, Deep In The Jungle and Skankandbass.

His talents were soon spotted by the seminal V Recordings, where label boss Bryan Gee was quick to announce Sl8r was going to be the ‘next big thing in the scene.’ Just as comfortable tackling raucous jungle beats as he is an ethereal roller, his diverse and varied creations showcase a talent for producing right across the drum and bass spectrum. 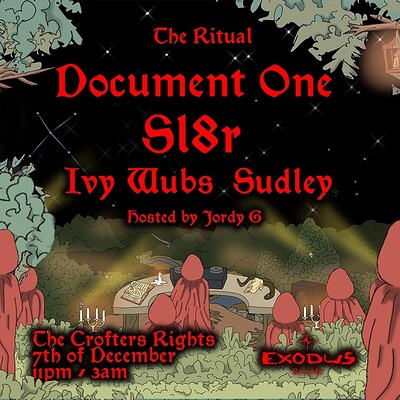