We're very excited to bring one of our favourite bands to Bristol for the first time all the way from Japan!

Having previously only played a UK date at Café OTO we can't wait to host them at The Crofters Rights.

Goat create music unlike any other band. Their highly percussive sound uses repetition and builds into a fury of muted instruments, harmonics and blasting saxophone.

After going through a reshape in early 2017 they have moved on to build compositions that explore rhythmic aspect even further, focusing more on intertwining patterns of repetitive rhythms.

We must be mental because now, with no increase in price for you guys, we've added Mai Mai Mai to what was already an incredible line up!

Born on a little island of the Aegean Sea around 30years ago.

Since childhood, he followed his parents around Europe and the Near East, assimilating the different cultures, atmospheres and sonorities of the places he was involuntarily taken to. Short periods of time which were intense enough to leave indelible traces.

This project is the transposition of those experiences into music and sounds: a mix of drone and ambient, steamy rhythmics, field recordings and sound-scapes which lead us to ancient and arcane ages, on the border between east and west.

After wandering for so long, he's now living in a little village on the Ionic Coast, in the South of Italy.

Check out his work here: https://maimaimaikr.blogspot.co.uk/

Bristol's finest music collective BLOOM make up so many of the great bands in our city, including our support for the night The Evil Usses! A super tight car crash of fun melodies and warped hypnotic breakdowns the group never fails to impress every time they play.

Hot off of a European tour to celebrate the release of their 3rd record on Stolen Body Records, Muck, we can't wait to hear all of the new material live.

Musical pervert Sloe Lorris will be joining us for the evening from London, with a bag of bizarre records in tow. With a long standing show alongside Bambooman on KMAH Radio, and guest appearances on NTS Radio we can't wait to hear what's in his dirty little bag.

Come and witness something special. 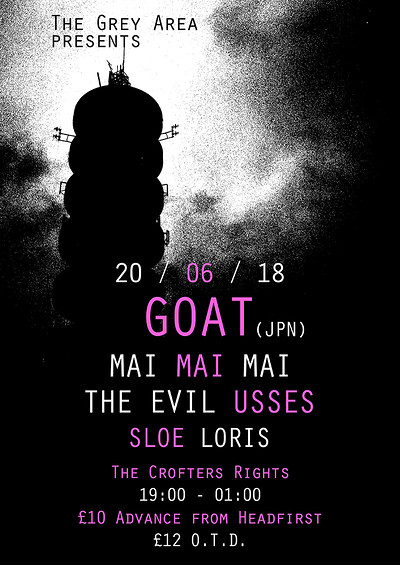