Expect breaks, beats & bass with plans to completely dec out the back room with a multitude of jungle decorations you might even forget you're in stokes croft.

We predict this to do the same, buy tickets early to avoid disappointment.

Rising to prominence in 2013 with his chart-topping track ‘Badboy’, championed by many as a modern Jungle classic, DJ Hybrid has remained an ever-present figure. In 2015 he won ‘Best Breakthrough Producer’ and ‘Best Breakthrough DJ’ at the We Love Jungle Awards in London. In November the same year, his debut album ‘Mixed Origins’ received support from across the entire dance music scene. In 2017 his acclaimed imprint 'Deep in the Jungle Records' won the award for 'Best Jungle Label' at the We Love Jungle Awards, a huge milestone in the artist's career.

Since then Deep in the Jungle Records has been recognised as one of the most prolific and forward-thinking labels around. DJ Hybrid is seen as one of the leaders of the modern Jungle movement, his unique style allowing him to gain a loyal following worldwide.
Mr Fitz & Mista Trick (Cinematic Experience)

After watching too many strange videos and old films on the Internet, 2 DJs have decided to combine bass fuelled swing, funk and hip-hop riddims with a visual aspect to give it another dimension. Mr.Fitz and Mista Trick are in a league of their own, taking Funky Swing n Bass to the next level. Mashing through vintage classics and soulful vibes, with distinctly down and dirty drum n bass, complete with matching visuals. It’s fresh, it’s fun, and they’re all about that funky boogie. Bring your flat caps and suspenders, and get ready to throw some funky swinging shapes! 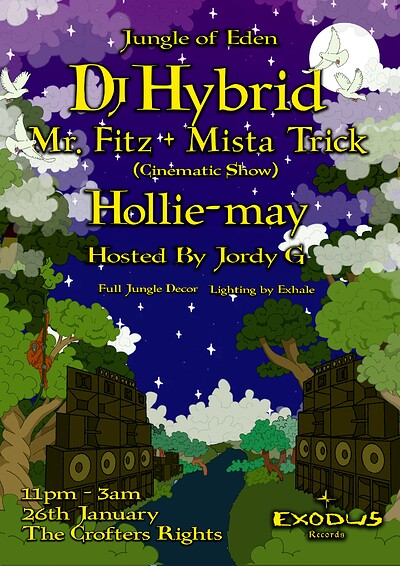