18+ event.
--
What do you do when pain blots out joy? How do you learn to take care of yourself? What happens when the things you think are helping end up doing the most harm? When Deeper put out their self-titled debut in 2018, they weren’t ready to approach these questions; by their own admission, they were still trying to discover their collective voice. The group — singer and guitarist Nic Gohl, guitarist Mike Clawson, bassist Drew McBride, and drummer Shiraz Bhatti — were all graduates of Chicago’s rich DIY scene who came together around their love of Wire, Devo, Gang of Four, and Television. Clawson and Gohl were longtime friends who’d met in high school, and whose percussive, fractalized guitar lines already seemed like a private language. Bhatti learned to fit stipples of drumwork in where he could, while McBride gave the group its sense of locomotion. Deeper would take them out of the basement and on national tours with Rolling Blackouts Coastal Fever and The Districts, and they’d share the stage with Jeff Tweedy in Chicago. When it came time to start work on their second album, hammering out the same sounds didn’t feel like enough. They wanted to find a way to alchemize the pressures, anxieties, and stresses they felt in their lives into their music. Auto-Pain is an album about learning how to suffer. It’s also an album about learning how to feel better. The snow-gray synths that blow across the album suggest that it’s not always easy to see the difference. “The whole idea of Auto-Pain was taken from Brave New World,” Gohl says. “They have soma, which makes you feel nothing, but auto-pain makes you feel everything. Let’s feel everything and see what happens at the end of it.” 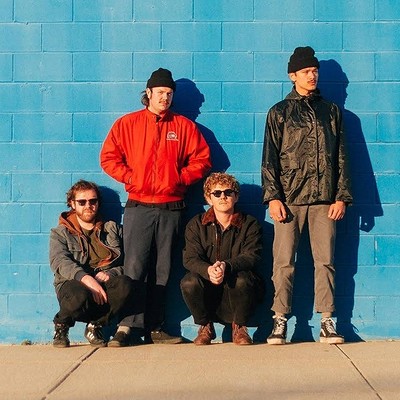