Grace Bland plus support - 5 bands for £5

— Electric Bear Brewing
Catch 5 amazing bands down at Electric Bear on the 13th of January for £1 a band and also celebrate the venues first night open of the year!
price: Headfirst Tickets

Come down to Electric Bear Brewing to Skinners Promotions first ever event!

We're hosting an amazing lineup of 5 of the top local bands right now for £5.

Grace Bland -
Grace Bland is an 19-year-old Singer-Songwriter who has a passion for writing and performing Indie Pop music influenced by the styles of Indie Rock and Folk-Pop. Her musical influences include artists such as Lana Del Ray, Maisie Peters, Gabrielle Aplin and Girl In Red.

The Surlings -
The Surlings are an indie pop band based in Bath, yet that seems an inadequate description. Comprised of Welsh Jacob Howells, whose ethereal, silky smooth voice breathes through insightful lyrics, Cornish Hugh Wilkin, whose compelling production and drumming propels the songs forward, and Londoner Jacob Hodder whose funky and understated bass exposes the intricacy and depth of each song. The Surlings push the boundaries of modern ‘pop’, think 60’s rock, soul and psychedelia fused with delicate and sometimes folk-like lyrics and instrumentation.

Evangeline -
Evangeline is a 20 year old, rocky indie pop artist from Portsmouth; taking creative influence from a range of styles like the lyrical intrigue of Hayley Williams, to the industrious riffs of psychedelic surf rock band, Ocean Alley and the beautiful harmony textures of pop princess, Ariana Grande. Her perfect blend of infectious melody lines and bold, gospel like harmonies, elegantly narrates her personal trials in the relatable honesty of her generation.

Water For Honey -
A vibrant Neo Soul band based in the West of England who have their roots in music that feeds soul.

Easy Peelers -
5 Piece indie pop band based in and around Bath, Uk. 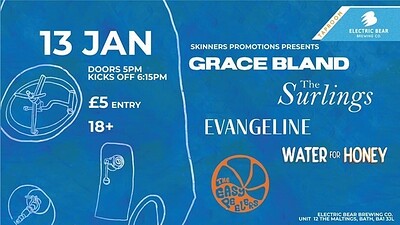