NO:IR - Bristol
Facebook - https://www.facebook.com/thebandnoiruk
Spotify - https://open.spotify.com/artist/5BVZqn07CjxpVxqBkmDzHw
'youtu.be/RMHrEhPfZ9c
'youtu.be/N9Qv-dlkW9Q
An atmosphere of menace, anxiety and realism, driven by fragility and cynicism. There is safety in disguise.
Exhale and Expire.
This is Noir.
NO:IR is a modern metal 5-piece based in South-West UK. Their engrossing and energetic live performance, and distinct blend of rap and metal has captivated audiences around the UK. NO:IR have made a statement within the underground scene by leading a resurgence of the classic 90’s Nu-Metal genre. Drawing heavily on influences from current household names within the hip-hop community and combining this with progressive technicality, NO:IR have established a signature re-imagination of the Nu-Metal sound.

TYRANTS - Swindon, UK
Facebook - https://www.facebook.com/tyrantsbanduk
Spotify - https://open.spotify.com/artist/2EnyQ8GjhCBz5LiosDtoUD
'www.youtube.com/watch?v=k-PGPsFwU-E
'youtu.be/PXA1VWpuW80
TYRANTS are a four piece HARDCORE / DEATH outfit hailing from Swindon, UK.
Since their formation, TYRANTS have had the pleasure of working with Beheading The Traitor, Hardcore Keem, Too Lit Mafia, BBC Introducing & more on their debut single 'FEAR' - which since release in November 2020 now stands at over 50,000 combined views and listens.
TYRANTS have since released their second single 'APOSTLE' in April 2021 courtesy of Slam Worldwide on YouTube and on all major streaming platforms, which now also holds the honour of over 50,000 spotify listens and 10,000 combined video views.
TYRANTS have had the honour of 'APOSTLE' being featured on Spotifys 'New Metal Tracks' and 'Metal UK' playlists, alongside such artists as August Burns Red / Devil Sold His Soul / IMMERSE / Lotus Eater / VEXED and more.
FFO: Knocked Loose / Thy Art Is Murder / Black Tongue.

DAYSHIFTER - Newcastle, UK
Facebook - https://www.facebook.com/Dayshifteruk
Spotify - https://open.spotify.com/artist/33vC9YrUEMYrX2LukkAZfW
'youtu.be/Ad9zhYez20k
'youtu.be/8AcCsfkaitc
Dayshifter, although formed in 2016, surfaced in early2017 featuring members Nathan Dillon, Tom Simpson, Anth Dickinson, Kyle Fosterand Liam Robson. Within a month of the band being brought to the public eye,their debut single In Despair was independently released and was promoted with a music video and a host of UK shows. Following this, the bands debut EP Hopeful // Regretful, which was produced by Dan Kerr of Avenue Studios, was released on July 28th 2017. Dayshifter have since returned to the studio after various runs across the UK to work on their latest EP, scheduled for release Summer 2021. 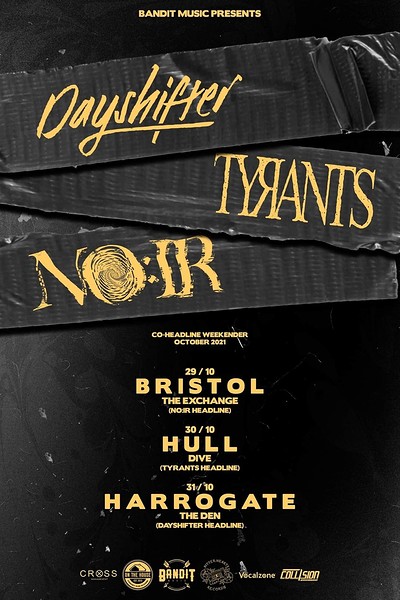