Though their taut, motoric beats might scream of '70s West Germany, Sei Still are, in fact, a five-piece Krautrock band hailing from Mexico City.
Their machine-like sonic experimentations emerged not out of acid-fuelled jam sessions in some underground communal space tucked away in this or that German city, instead, of three friends taking a random trip to desolate Mexican woodland to work on a couple of songs that would end up leading them to start a fully-fledged band. Now based in Berlin as of March 2020 and signed to renowned London-based label Fuzz Club, in April 2020 they put out their (now sold out) debut album ‘Sei Still’ to critical acclaim.
As well as the given indebtedness to bands like Can, NEU! and the minimalism movement, Sei Still say that they also take great inspiration from Tarkovsky's ‘Stalker’, ‘Easy Rider’ and the aesthetics of Spanish new-wave bands like Aviador Dro and Décima Víctima.
Now ready to transmit their angular Krautrock to a trans-Atlantic audience, Sei Still have spent the last few years cultivating a notorious reputation in their native Mexico, sharing the stage with the likes of Stereolab, Kikagaku Moyo, Holy Wave, Institute, New Candys, 10 000 Russos and Lorelle Meets the Obsolete.
+ supports TBA 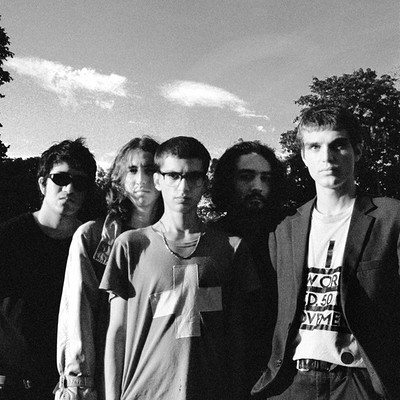