Wizzarding Promotions presents an evening of heavy psychedelia at The Exchange's Basement, featuring:

Prolifically touring for well over a decade, Darsombra has performed in 20 countries throughout North America, Asia, and Europe, at music venues, festivals, DIY spaces, house shows, galleries, city ruins, cultural centers, record stores, coffee shops, and parks—not to mention their legendary pop-up generator shows at national monuments and forests, or just by the side of the road.�

Following releases on labels in the US, Europe, and Asia, such as At A Loss, Public Guilt, Exile On Mainstream, Translation Loss, and Noise Bombing, Darsombra self-released their latest album, 2019's Transmission.

"If you’re of the belief that sonic resonance can affect those who experience it on a spiritual level, I can only recommend you open your mind as wide as (possible) and go see Darsombra. There are few live acts who so clearly revel in the process of what they’re creating on stage and presenting what they have created. . . it’s hard not to be swept up in that joy as it hits in swells and waves of drone and experimentalist guitar, keys, percussion, vocals, and visuals."
- JJ Koczan - The Obelisk

". . . the perfect soundtrack to being transported either bodily or mentally to another world, to be immersed into another culture, another civilization . . . sounds and experiences that could be described as beyond this world."
- Luke Hayhurst - Destructive Music

". . . the sound of a slow ascension towards a higher elevation, if not a higher state of consciousness."
- Ray Van Horn, Jr. - Blabbermouth

"Despite their clear psych trappings and nods to the likes of Hawkwind and Magma, Darsombra's sound is modern and tuned-in, a perfectly interlocked web of visuals and electronic sounds, exploratory and grasping toward transcendence."
- Matthew Moyer - Orlando Weekly

"With a unique sonic blueprint, Darsombra achieve the sheer transcendence and intensity that most drone acts can only dream of with an enviable effortlessness . . . aims skyward, reaching for a celestial warmth, while skillfully implying a myriad of other textures and emotions en route. The sheer evocative power of the music is huge . . . feels like a psyched-out soundtrack to the Earth’s formation and evolution of complex life in slow motion – majestic and utterly vast."
- George Leeming - The Sleeping Shaman

"I encourage you to clap on a pair of headphones, close your eyes, and let Darsombra coax you away into a kinder, brighter, trippier plane of existence."
- Kim Kelly - NOISEY

Music to touch your soul quite relies on one essential: changing your perspective, opening up a different view on the world than the one you might have cultivated in your life so far. And the best stories are always the ones that no one told yet.

Conny Ochs envisions the signs, concealed and hidden to others, he is able to read the world much more detailed and in higher density. The results of his observation he channels into narratives driven by fervour and vulnerability. The new album “Doom Folk” walks new tracks but sometimes they are just running parallel to the old paths.

Conny is touring since years as some kind of rock’n’roll vagabond throughout the land and countries, traveling from one show to another, playing the urban prairie as well as rural downtowns. He’s a solo artist, mostly on his own but never lonesome. Witnesses of his journey are the albums “Raw Love Songs” (2011), “Black Happy” (2013) and “Future Fables” (2016), illustrating the evolution from a Blues/Folk-infused troubadour to the iconic singer/songwriter he is nowadays. While his early days circulated around the cliché of the lonesome rider, armed with a rugged dreadnaught guitar and a harp and the musical expression being bound to these limitations the most recent album “Future Fables” already shed light on the direction he is now walking in a firm tread. “Doom Folk” closes a bracket around its three predecessors as well as the two records Conny Ochs recorded with Scott “Wino” Weinrich (“Heavy Kingdom”, 2012 and “Freedom Conspiracy”, 2015), which were also driven by a stripped-down, almost naked attitude in musicality. While the inspiration is still clearly apparent on “Doom Folk”, something feels new, fresh and diverse. Let’s make no mistake, the record is still a Conny Ochs album, coming from dark and melancholic dreams, wrapped in songwriting full of urgency and bittersweetness. There is the rhythmically prancing bijou “Moon” about the back and forths of love, the doughty “New Ruins” and “King Of The Dead” adressing inner weakness and faint.

But it doesn’t end there. Conny opens his sounds and skills up to a wider instrumentation: bass, drums, percussion and organs find their way into the sound, adding tonal urgency, distortion and volume to “Doom Folk”. The opener “Dark Tower” comes across like an ignition. The track pays tribute to the tragic death of Chris Cornell. “Hammer To Fit” cultivates a booming organ, giving his trademark sound a new level of hope and optimism while the guitar shimmers in engaging clarity across the tundra, paying reminiscences to stalwarts like Howe Gelb or Rainer Ptacek.

Of course, “Doom Folk” presents a Country track as almost obligatory effort: “Gun In The Cradle” is an eclectic sculpture of American songwriting, uncompromising, yet undisputable. And then there is “Drunken Monkey”, which is, arguably a perfect pop song. Counterbalancing the shiny brightness on these songs darkness cuts through in “Waiting For The Pain”, an anthem-like dive into pain and foremost in “All Too Bright”, a shadowy blues track which brings in parallels to the morbid prurience of some Nick Cave. Thoughts and emotions steer into manic stages in the Gospel-driven Rocker “Crawling”.

And so, “Doom Folk” fans out the authenticity of Conny Ochs in more diversity than ever before. Melancholy and insanity, attrition and hope – nestled in a loud/quiet dichotomy, carried forward by clean, and pure tones until the same erupting in a distortion and dissonance created by driving an old fashioned amplifier tube into saturation.

Circus Cannon are four idiots who got together to make unreasonably loud psychedelic rock. They’ll grab you by the lapels and drag you through the astral plane by way of the ninth circle of Hell and then dump you in a seedy alley somewhere. They just want to have a good time, they’ll be your best friend, but you shouldn’t really trust them. Come see one of their ecstatic, chaotic live sets in a reputable venue near you and get your eardrums perforated. 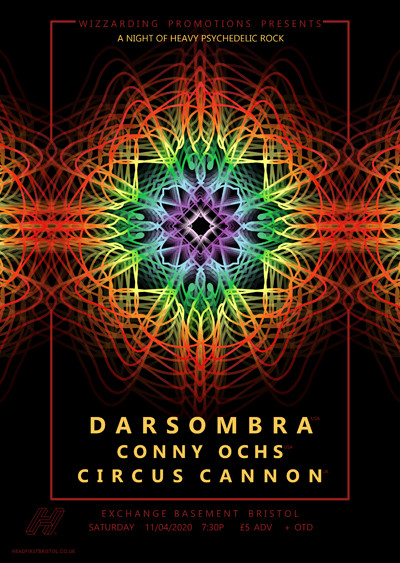