Right In Front Of You Presents: Sunder 2021

— Exchange
Right In Front Of You Presents Sunder Festival. All day at Exchange, Bristol
time:14:00
price: Tickets Below

Right In Front Of You Proudly Presents…

Sunder features an elected mix of Indie, Garage Rock, Grunge, Dream Pop, Neo Soul and much more. This event showcases some of the finest new bands from across the UK as well championing some of Bristol’s finest contemporary artists.

Valeras
Valeras’ mix of heartfelt vocals and groove based rhythms have made their live shows unmissable. Championed by BBC Introducing, Annie Mac, The Jack Saunders R1 Indie Show and Radio X's John Kennedy, Valeras are winning friends wherever they play.

Gaffa Tape Sandy
Formed in 2015 by three friends with a desire to do something loud and exciting, Gaffa Tape Sandy’s popularity quickly escalated thanks to a series of incendiary live shows and a seemingly endless succession of instantly memorable garage-punk/rock tunes.

Riscas
Channelling spritely indie-rock sentimentality with a tropical edge, Birmingham four-piece Riscas evoke a seamless concoction of influences infusing the wriggling rhythms of Vampire Weekend, the euphoric, festival ready choruses of The Maccabees and the anecdotal earworms of The 1975. Amassing over 6,000,000 streams and 100,000 monthly listeners on Spotify,

China Bears
China Bears formed in the winter of 2015 after twin brothers Ivan and Frazer met James and Dean at university in Guildford. Since then they have released 3 singles independently, played all across the UK and received national radio play from Huw Stephens on BBC Radio 1, Steve Lamacq on BBC 6, Melita Dennett on BBC introducing and John Kennedy on Radio X.

Wych Elm
wych elm, after the folktale namesake, birth a torn at the seams and raw breed of slacker rock. they embody their mental illness with cranking basslines and fragile guitar parts. they dig into offbeat themes such as susan smith who murdered her children in the 90s and more maternal themes.

Pocket Sun
blending velvety layers of cosmic soul on a foundation of steady grooves. The songs explore a world outside our ‘selves’ through intertwining concepts of identity, perception and relationships. Influenced from a plethora of alternative electronic pop artists including Little Dragon and Washed Out, the band craftily combine electronic and vocal sound sources, creating a radiant beam of dreamy, hyper-melodic soundscapes.

Pale Blue Eyes
Pale Blue Eyes are a compelling new alt-pop three-piece, with joyous Krautrock rhythms suggestive of a young English Neu!, plus guitar like Echo And The Bunnymen’s Will Sergeant at his most wired and raga-frenetic. Elsewhere, at their more prettily bittersweet, PBE recall The Cure circa 1980.

Stay Lunar
Since forming in Bristol, UK in 2019, Stay Lunar have really established themselves with their polished dreamy/bedroom-pop sound. On the back of support slots with Larkins, Little Comets and SPINN, their latest single ‘Dreaming That I’m Not In Love’, saw them gain worldwide recognition, having been featured on some of the internet’s most reputable blogs, channels and Spotify playlists; as well as being chosen as BBC Introducing in the West’s ‘track of the week’.

JOY
There is no joy but noise emanating from this Bristol based 4 piece. Hybridising the post-punk scene that has risen in the UK over the last decade with shoegaze and indie sonic portraiture, JOY are working towards the release their debut EP which is due to be set free in 2021.

English Garden
English Garden merge of laid back alt. rock inspired elements with dark raw energetic vocals and riffs to create a unique blend of melancholic sound. “What happens when you’re just a bit too knackered to be pissed off all the time? Enter, English Garden. This Bath-based four-piece are taking the essence of grunge and merging it will chilled-out yet psyched-out grooves.”

Radio Laika
Orange and blue alt-pop trio Ironically artsy, seriously unhappy. A person called Radio Laika does not exist but if they did, they would be lost in this world. In their eyes you would find a cheerful optimism; in their words, loneliness. Whether you loved them, liked them, or dealt with them, you would always find a place for them. 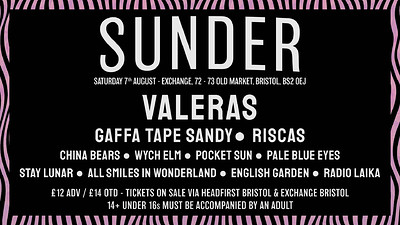