Julia Masli is an Estonian born, London based performer, theatre-maker and clown. She is committed to the exploration of how to be a human being in the world, or at times - a blade of grass. Her work aims to connect directly to audience’s hearts, make their bellies hurt from laughter, and transcend the concept of time and space, on a good day.

Winner of the Malcolm Hardee Award for Comic Originality at Edinburgh Fringe 2019. Most recently, her show Legs had an extended sold out run at Soho Theatre. Julia's show Anna Karenina Na Na with The Pushkinettes was nominated for an Off West End Theatre Award for best production at Voila Europe Fest 2019. She is a frequent performer at New International Encounter, having toured "We Come from Far Far Away" - a show that won the Hedda Award for best performance for young audiences in Norway, and "Spynet" - an interactive audio experience.

"Absurd, devastating, intense, and she has complete control of the room." - The Fest
"Masli's set pieces hit every beat, leaving the audience in stiches." The Skinny 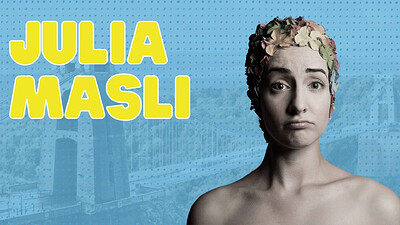